Legend has it that whoever possesses the lance will rule the world. The lance appears both in factual history and in fiction. In the Wagner opera Parsival, Klingsor was a despicable adversary of the Knights of the Holy Grail. The fiend sought to capture the Spear of Destiny from them and use it in his practice of black magic.

In history, no figure was more feared than the black magician Landulph II of Capua. He, too, was obsessed with the power of the Spear of Destiny. Hitler identified the similarities between Wagner’s character and the magician. He saw their struggles as parallel to his own quest for the holy icon.

To Hitler, the blood purity of the Grail Knights and the maniacal quest of Klingsor and Landulph for the spear was the blueprint for world conquest by Nazi power. Hitler believed he would one day fulfill a historic destiny. How he would do this was not clear until he was 21. While in the Hapsburg Treasure House in Vienna, Austria, Hitler heard the words which he said were to change his whole life.

A museum tour guide stopped in front of a display of an ancient spear and told of a legend that whoever possessed it would hold the destiny of the world. The guide said the spear was supposedly the one which a Roman Centurion thrust into the side of Jesus Christ at the Crucifixion. After the group departed, Hitler stepped forward for a closer look.

"I knew with immediacy that this was an important moment in my life, and yet I could not divine why an outwardly Christian symbol should make such an impression on me," he said later.

After his initial experience with the Spear of Destiny, Hitler studied the history of the ancient relic. He was intrigued and amazed at its incredible story.

For more than 1,000 years, the spear had been a symbol of power to the emperors of the Holy Roman Empire. Century after century, the legend of the Spear had been fulfilled for good or evil. Constantine the Great claimed the spear guided him through providence. The Frankish General Karl Martel used the spear in battle. Emperor Charlemagne lived and slept within reach of the spear, and attributed 47 battle victories to its powers. In all, 45 emperors over 1,000 years claimed the Spear of Destiny as a possession.

Hitler decided he had to possess it. Over the next three years, he made countless trips to the museum to gaze in awe at the spear. He recalled that one day as he stood in front of the display, he went into a trance.

"I slowly became aware of a mighty presence around it -- the same awesome presence which I had experienced inwardly on those rare occasions in my life when I had sensed that a great destiny awaited me."

In the months that followed, America unleashed the most destructive force ever known to man: the atomic bomb. While in possession of the Spear of Destiny, America became the undisputed ruler of the world. The spear now once again resides in the Hapsburg Treasure House Museum in Vienna.

Comment by Besimi on November 3, 2010 at 1:22am
Among other pics,the construction itself:
SS building project at Wewelsberg, 'Heinrich Himmler's Camelot'. This castle is at the tip of Himmler's Spear. and a :
A 3-D model which clearly shows the Spearhead effect intended by Himmler's chief architect, Bartels. The tip of the spear is the Wewelsberg castle. 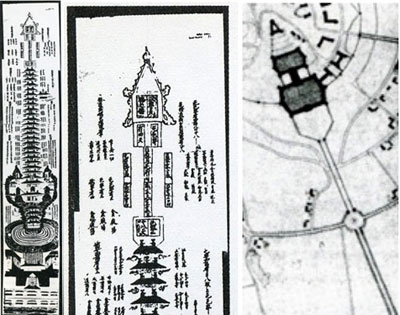 Comment by simpleman on November 2, 2010 at 11:27am
Its stuck in our backs, thats the way I feel. I doubt the real one was returned to Vienna.

Comment by Trudy on November 1, 2010 at 2:39am
As far as I know, Hitler was addicted to the hard drug speed. I read that he was in trance, that was certainly the sparse time he was clean.
Thanks josev Namasté my dear friend ~*L*~