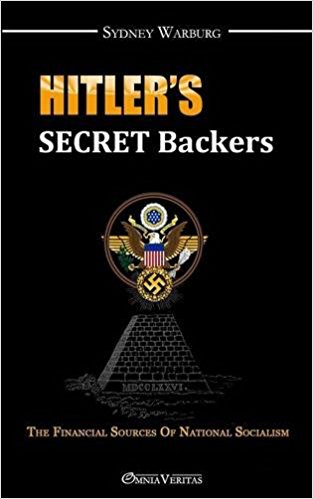 "World events are staged and managed by those
who hold the purse strings," said former UK
Defence Minister Dennis Healey.
The Rothschild Syndicate's backing of Hitler
is a prime example.
by Henry Makow Ph.D.
In the depth of the Depression, the Nazi Party's appeal to many Germans was food, a clean uniform and a gun.
The Nazi paramilitary  SA (Sturmabteilung ) grew from 400,000 men in 1930 to over three million by the end of 1933. The cost of supporting all these people was steep. If a suppressed booklet, Hitler's Secret Backers, (1933) is correct, the bill was picked up by the Rothschilds. Their only requirement for this aid was that Hitler adopt "an aggressive" foreign policy.
The Illuminati instigate endless war to destroy, degrade and finally subjugate humanity.  They encumber nations with "debt" incurred to buy armaments from them, and consolidate power with wartime measures which become permanent. Finally, as Luciferians, they serve their god by sowing chaos and destroying humanity.
Specifically, WW2 killed roughly 50 million European Christians, wiping out the cream of another generation. It also provided a justification for the establishment of the State of Israel, world HQ of the satanist Illuminati.
Hitler's Secret Backers was ostensibly written by a "Sidney Warburg," son of banker Paul Warburg, the founder of the US Federal Reserve and a Director of the Council on Foreign Relations. He claims he met Hitler three times in 1929, 1931 and 1933 to arrange payments of $10 million, $15 million and $7 million respectively.  Apparently Hitler chose the democratic path to power because these sums were not enough to finance a coup d'etat. The problem is that Warburg's son was James Warburg, not Sidney. We'll address the question of the book's authenticity later.
HITLER'S BENEFACTORS
The Powers That Be try to dismiss this book as another anti Semitic hoax. However the book is not anti Semitic. The Rothschilds are not mentioned once. The New York financiers --Rothschild frontmen--are depicted as non-Jews.
Sydney Warburg describes a meeting in July 1929 with a "Carter" (John Ridgley Carter) the president of JP Morgan's Guarantee Trust,  "the young Rockefeller" (John Davison Rockefeller Junior) and "Glean from Royal Dutch" (i.e. Henri Deterding).
The book is critical of Hitler and the Nazis.  "Sydney Warburg" describes Hitler convincingly. "...he is not intelligent but unusually self centred and tenacious." He says Hitler's long rants made it impossible to carry on a discourse, and he carelessly "babbles about his plans without the slightest hesitation." (85)
Hitler  "couldn't get away from the Jewish problem. That was...of the greatest importance for the German people." (86) They will be removed from all public positions. Immigration of Eastern Jews and all other inferior foreigners will no longer be permitted.  The rights and interests of Germans will henceforth supersede all others. (p.69)
There is no doubt in my mind that the Rothschilds were responsible for the holocaust.
Essentially Hitler was false opposition. He was the arms-length creation of the central banking cartel he railed against. According to Warburg, Hitler "could tell he was dealing with someone who represented the strongest financial group in the world." (85)  He wondered out loud if the German-born Warburg was Jewish but was content not to look a gift horse in the mouth. Warburg's German name was enough.
"Revolution costs 500 million marks," Hitler told Warburg. "Legal takeover costs 200 million marks. What will your backers decide?" (57)
After the first transfer of money, the US Press suddenly took an interest in Hitler. Seemingly speaking with one voice, it described Hitler as "the saviour of Germany and a rising name in Europe". (37)
At one point, Hitler tells Warburg that the Western leaders are a bunch of old wives. He only respects Mussolini and Stalin: "Stalin is a Jew. That is a shame." (53)
Warburg was in Berlin when the Reichstag burned. "If it is true that the Hitler Party had a hand in the burning, then Hitler is the best actor I have met in five continents." (88)
AUTHENTICITY
Whenever the Elders of Zion are exposed, they proclaim the document a hoax. Indeed, there are some internal references that would throw the reader off James Warburg's trial. For example, he says both he and his father were born in the USA, which is not true.  These references were planted to allow Warburg to disavow the document if necessary. 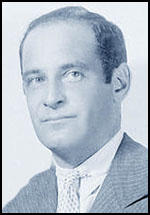 A lot more that points to his authorship. First Warburg (left) was born in Germany and a fluent German speaker. He was only 33 years old in 1929 but had been a bank vice president for eight years. He became an advisor to FDR but left government in 1934, which would coincide with his alienation from the bankers' plot.
In Feb. 1950, Major Robert H. Williams reported: "Last November, the widow of the late General Erich Ludendorff, on trial at Nuremberg, explained why her husband broke with Hitler. She stated that, ...as early as the summer of 1929 James Paul Warburg had undertaken an assignment from financial circles in America, which desired to exercise solitary influence on Germany in the unleashing of a national revolution. Warburg's task was to find the suitable man in Germany, and he entered into contract with Adolph Hitler who subsequently received sums of money amounting to 27 million dollars up to January 30, 1932, and still another seven million thereafter, enabling him to finance his movement."
On February 20,1933, referring to Warburg's final visit, Goebbels confided in his diary:" We are raising a huge sum for the election (Reichstag election, March 5) that disposes of all our financial problems at one blow." (97)
Finally, the booklet is replete with little details that reflect the attitude of a bewildered visitor. He describes in detail a Christian sermon given to Nazi soldiers: "The enemy that Christ wanted to conquer by his crucifixion aspires to rise ..in the Wandering Jew" ... epitomized by Stalin.  (64)  He describes a conversation with his uncle who admits he is a member of the Nazi Party despite being Jewish. (101)
In addition, Warburg describes the central role of banker Eduard Von der Heydt, someone only an insider would know about. Von der Heydt's eventual alienation from the Nazis is mentioned in the book. Warburg knows how Morgan's Guaranty Trust communicated in a code.
Most likely Sidney Warburg is the young James Warburg who had, at that time, compunctions at empowering a lunatic.
Warburg concludes, that Hitler's "actions will prove if he is bad, which I believe he is. For the sake of the German people I hope I am wrong. The world continues to suffer under a system that has to bow to a Hitler to keep itself on its feet. Poor world! Poor humanity!" (90)
The bottom line is that Hitler may have been sincere, or he may have been a consummate actor, but he was false opposition. He was put into power to do what he did, kill a lot of European Christians, discredit all the things he represented (race, nation, anti-Semitism), and provide a rationale for the establishment of Israel.
Mankind has been colonized by a satanic cult. This is symbolized by the Illuminati pyramid on the face of the US dollar, the reserve currency.
We have to placate our Masters by never mentioning their name and by succumbing to their PC. We have Stockholm Syndrome.  People who betray their civilization are rewarded with fame and fortune. People who resist are punished and sometimes killed. In the meantime, we
are distracted and degraded with lies and fantasies.
------
Related - Hitler Could Not Have Come to Power Without Illuminati Jewish Compl...
- See more at: https://www.henrymakow.com/#sthash.GsM60IgG.dpuf

Comment by CHRISTINA on April 25, 2017 at 10:32am
Mankind has been colonized by a satanic cult. This is symbolized by the Illuminati pyramid on the face of the US dollar, the reserve currency.
We have to placate our Masters by never mentioning their name and by succumbing to their PC. We have Stockholm Syndrome.  People who betray their civilization are rewarded with fame and fortune. People who resist are punished and sometimes killed. In the meantime, we
are distracted and degraded with lies and fantasies.