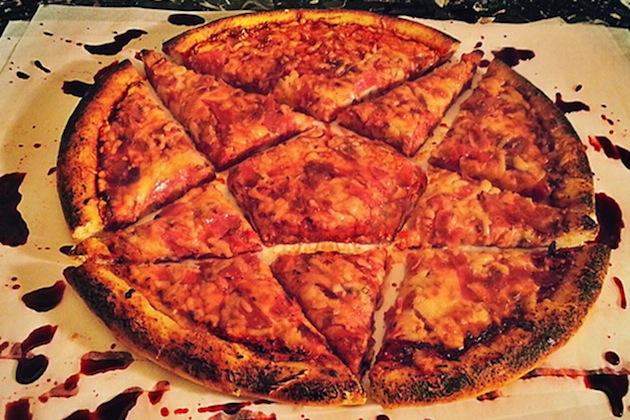 with Satanism and/or pedophilia.

Dan writes: "This article because it educates the public as to a filthy "scene" that festers and breeds under the auspices of university art departments of the major Leftists incubators.   I knew a lot of people into that.  It has no leadership, no visible structure, and those in it believe was founded by the pantheon of 'rebels' they're given by publishers, art museums, record labels and critics.  Names ranging from Jack Kerouac and Alan Ginsberg to Betty Page and Anton Lavey.   The common cause of the whole lot was summed up by the GG Allin performance YouTube you posted. I've learned since November that this deranged fellow has become something of the latest role model and idol in that pantheon, for "art" girls like Cassandra. "

Pizzagate is not just about Comet Ping Pong pizzeria, pizza in pedo-Satanic context can also be found in many song lyrics, videos and on stage.

One of the groups playing in Comet Ping Pong is called Sex Stains. In their video Land of La LA they use pedophile symbol, documented in an FBI file. The video was made by Cassandra Lee Hamilton. She also directed the film The Miraculous Tale of the Children and posed in front of the photograph on the wall, where pizza is cut in the shape of inverted pentagram. On her Instagram profile is this photo:

"GG" Allin was known for his live performances featuring coprophagia, self-mutilation and attacking audience. His lyrics expressed misogyny, pedophilia, blasphemy and racism. He believed his body to be a temple of rock and roll, and his flesh, blood and bodily fluids a communion. He said that if he would not be a performer, he would probably be a serial killer or mass murderer. In 1989 he was arrested and charged with "assault with intent to do great bodily harm less than murder" of a female. Allin admitted to cutting her, burning her, and drinking her blood.

Allin's last show was in 1993 in Manhattan. During the second song, the punk venue cut the power, after which he trashed the club, walked the street naked, and covered in blood and feces, he went to his friend's apartment, where he died after heroin overdose. Below he puts pizza on his head and reproductive organs during the show.

In September 2014 the metal servers came with the blood-soaked Slayer pizza, created by John Hurkes, working at the Bulldog N.E. restaurant in Minneapolis. The pizza is cut into shape of the Satanic pentagram.

Opening track on Slayer's 1986 album Reign in Blood is Angel of Death, written by guitarist Jeff Hanneman, inspired by Mengele's experiments (on children). Hanneman was collecting Nazi memorabilia and putting Nazi clues on his guitars. We now know that MK Ultra and Project Monarch were based on Mengele's sadistic work.

Bathory was a metal band, considered to be the blueprint for Scandinavian black metal, a synonym for Satanic metal. In the 1990s, members of the scene were responsible for church burnings and murders. In 1997, the former drummer of Bathory, Jonas Åkerlund, directed the video for The Prodigy's Smack My Bitch Up, depicting drug use, violence and nudity. Since then he worked with Madonna, Metallica, Ozzy Osbourne, Iggy Pop, The Rolling Stones, Blondie, U2, Christina Aguilera, Britney Spears, Rihanna, Nicki Minaj, Taylor Swift and so on. On Åkerlund's page with hidden inverted pentagrams you can also find a commercial labeled Weight Watchers - Pizza. On the photo below "Aryan goddess" Taylor Swift with a fan.

Lady Gaga is "obsessed with" spirit cooking "artist" Marina Abramović and she is calling her "incredible woman" and "limitless human being." In 2009 Lady Gaga released a video for the song Paparazzi, directed by Åkerlund. Then she was posing in a black metal style promo photo. Next year she released the video to Telephone (together with Beyoncé), also directed by Åkerlund. In 2011 she came with the song Pizza.

Miley Cyrus with lactose intolerance is really obsessed with pizza, no matter her handicap. She is wearing pizza themed clothes, likes to sleep in "pizza-bed" and created a number of collages with pizza, for example changed cover of Nirvana album below.

Katy Perry gave pepperoni pizza to a 10-years old girl on stage in Auckland in 2014, while touching her. In 2014 she also released very creepy video to her song This Is How We Do including people playing ping pong and her wearing pepperoni pizza outlet, having pizza nails and earrings. She wants to buy a house previously purchased by Daniel Donohue, where his son committed suicide, after he was nearly murdered in 1969 by Charles Manson.

In the film Party Monster (2003) Culkin's character, Michael Alig, was the king of NY party scene and the leader of non-stop drugged-up bunch The Club Kids. He killed the dealer called Angel and was crazy enough to admit it on the record. (Owner of Comet Ping Pong James Alefantis posted an article about Alig, when he was released after 17 years in prison.)

Example of pizza rap is here. You can find more related information at facebook.com/antisapage.

Related- What is the Pizzagate Scandal?