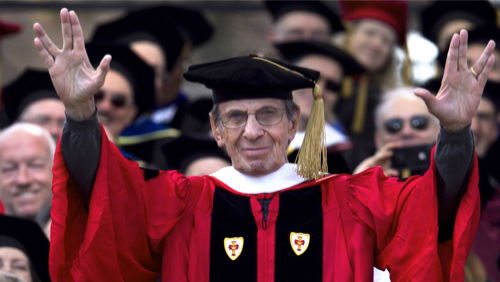 In keeping with their role as willing dupes,
millions of people have been using the
hand sign Leonard Nimoy popularized
to honor his passing. This was his final service to the
the NWO, and the subjugation of the human spirit.

On the death of Star Trek actor Leonard Nimoy last week, many tributes took the form of the "Vulcan" hand sign which he made famous.

Satanists usually have benign explanations that enable them to contaminate society. I'm not 100% sure Nimoy was a Satanist but I would wager that he was. The benign explanation is that he introduced the sign into a Star Trek episode spontaneously, and it took off. He explained that the gesture takes the shape of the Hebrew letter "shin" and is a blessing ("Live Long and Prosper") that rabbis give their congregations. 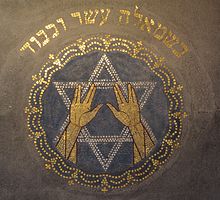 "People don't realize they're blessing each other with this. It's great," Nimoy said.

However, in a longer explanation, seen here, Nimoy makes it clear that this "greeting" is far from benign. It is part of a  powerful Cabalist ritual that can actually damage people. He was warned to shield his eyes:

There was a "strange sound, not singing, shouting, all discordant, wailing, all discordant, not in unison...chilling...whoa, something major is happening here so I peaked and they had their hands stuck out making this sign...I had no idea what was going on but the sound of it, the shape of it was magical."

Most Jews and non-Jews are unaware that Judaism is largely based on Cabalism. Cabalism is Satanism because it says God is formless and unknowable, not even part of the universe. The essence of Satanism is to deny God. The essence of religion is that God is knowable. How else can we obey him?

"Kabbalism is a system of Jewish mysticism and magic and is the foundational element in modern witchcraft. Virtually all of the great witches and sorcerers of this century were Kabbalists," Texe Marrs explains: "[It is] the wellspring of virtually every wicked, occult sect, satanic secret society, and witchcraft cult that has arisen in the past one thousand years! The Cabala brings together... all the Mystery teachings of the ancients. Indeed, the Holy Bible [says] the Jewish elders had brought the Mysteries into the Temple and had conducted secret ceremonies in hidden chambers [in] the days of the prophet Ezekiel (see Ezekiel 8). God called these teachings and rituals "abominations." 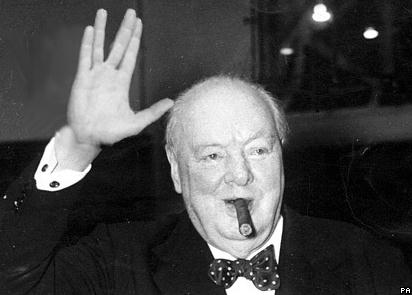 T. Stokes, a veteran of British intelligence said: "This version of the "V" salute is a greeting by Rabbis in the Hebrew tradition. The hand split down the center represents the 2 letters on each side of the "V" in deVil, as the initials DE and IL represent the fingers."

This explains why Winston Churchill, a Druid and Illuminati Satanist, used this gesture.

The Vulcan "peace sign" is anything but. Vulcan was a sun deity who was associated with fire, thunderbolts, and light. The festival in honor of him was called the Vulcania in which animal sacrifices were offered.

He bears a family relationship to the Christian devil. It is fascinating to know that he married Venus, another name for Lucifer or the devil. What is even more interesting is that Vulcan is adored in Masonry under the name of Tubal Cain. In the Masonic Quiz Book the question is asked: "Who was Tubal Cain?" The answer is: "He is the Vulcan of the pagans."

In Masonry, Tubal Cain is the name of the password for the Master Mason (or third) degree. Former mason Bill Schnoebel said: "This is called the 'Two Ball Cane,' and is a pun on the secret password of a Master Mason, 'Tubalcain (sic).'...It is also an all-too-obvious pun on the 'god' of Masonry, the male reproductive organ. Nice, eh?...especially when many men wear these wretched things to church on Sunday!"

Was our hero Leonard Nimoy aware of the implications of the hand sign he made famous? Considering that Star Trek was predictive programming for the New World Order, and that Nimoy was a success in Illuminati controlled Hollywood, I'd say he was. 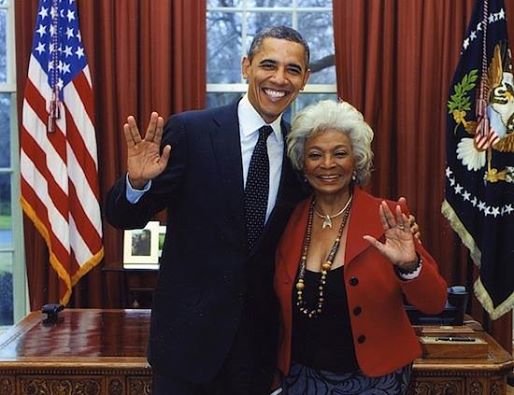 Mankind has been inducted into a satanic cult and doesn't even know it.

I grew up in Hollywood. The Nimoy's were friends of my family.  Nimoy was a cold, detached - malignant Narcissist. My Father was part of the "Rat Pack" with Leonard, and a long list of Hollywood Jewish males.

His first wife Sandy was a wonderful compassionate, kind loving woman. Leonard had a fascination with Kabbalah.

"Nimoy published The Shekhina Project, a photographic study exploring the feminine aspect of God's presence, inspired by Kabbalah."
[Essentially he tried to make ugly beautiful, which is what Satanis... See google images. The Shakhina Project

Jane D in Santa Fe filled me in on Spock's Jewish subtext in a dinner conversation in 2004. The 'Vulcan hand sign' for instance.  She told me Spock's  'Vulcan mysticism' was Kabbalah.  Vulcan was a metaphor for Israel.   Once you know that  Spock's entire character is based on that, a cascade of references tumble out.

I was exactly the age of the first 'Trekkies' so I'd thought I was saturated in Trek trivia.  We'd always seen the UN metaphor in the United Federation of Planets. 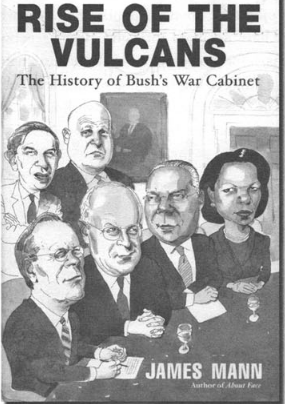 At that impressionable age I actually bought into the 'One World Government' notion as the 'natural evolution' of the human race.  Much to my grandfather's consternation; I remember saying that to him once and he dropped his face into both hands, exasperated.  That was probably when he showed the term 'one world order' in an old book he had by Woodrow Wilson, and about the Illuminati.   It went into my memory but I went on believing in that one world government was natural evolution till 2001.

In 1967, I ordered a copy of the 'Star Trek Bible' for script writers which laid out the 'universal' facts about the Star Trek world that had to be consistent.   Star Trek history begins with the 'Eugenics Wars' of the 1990's, when Emperor Khan tries to take over the world with his race of genetically enhanced Supermen.  Nuclear war resulted around 2000.


However, a more advanced version of the the human race has been watching, and only make themselves known in order to save the planet.  They " facilitated humanity's transition to an interstellar species acting as sort of a big brother in those crucial stages."   Of course these were the Vulcans.  Smarter than humans, but not flaunting it too much; pacifist peace makers, governed by reason and pure intellect, their raison d'etre is to guide the evolution of all the species to oneness with the infinite. 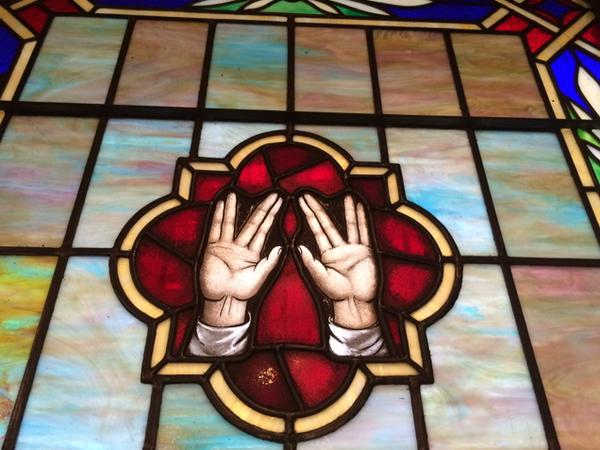 The absence of any Al Goldstein's or Meyer Lanski's - or even no Bill Shatner's on Vulcan is actually explained in Roddenberry's Vulcan ancient history.  Originally they were prone to use their powers for lust, greed, and destruction, but their own suicidal wars brought forth the Vuclan savior Surak. He taught the Vulcans his system of self control through logic.

One could on for hours with this stuff.   In one episode someone suggests Spock could be promoted to captain and he responds that it's wiser to be the power behind the throne.  Which is an amusingly 'Rothschildian' touch.

Leonard Nimoy's been famous most of my life and the Spock character never did me any psychological harm.  In retrospect I consider the character to have been a good influence for boys growing up.