Maya's Completion: The Astrology of the 9th Wave Saturday, 01 October 2011 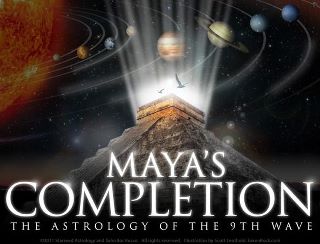 Maya's Completion: The Astrology of the 9th Wave
Saturday, 01 October 2011

An awakening is taking place upon planet Earth that will forever change the course of our future as a civilization. At long last mankind will begin to fulfill its Divine potential and create a world of peace, prosperity, and ever-increasing achievement. Central to this collective ascent is that human consciousness is evolving in revolutionary fashion. Although darkness blankets the nations a great cosmic truth is dawning: that cycles and order are inherent in Creation and that on October 28th, 2011, as the 9th Wave of the Mayan Calendar completes, humanity will have finally become qualified to receive Cosmic Consciousness.

For millenniums the Mayan priesthood has kept a powerful secret. This secret is encoded within what today is loosely called the Mayan Calendar which the average citizen aptly equates with impending catastrophe. An agenda of insidious design has deceived the populace as to what the true nature of the Mayan Calendar is: a sacred system that reveals the relationship between the evolution of human consciousness and Creation itself.

The Mayan Calendar emerged during what is called the Mayan Classic Period which extended from approximately 250AD to 900AD. During this time the Maya most notably distinguished themselves from neighboring civilizations by conceptualizing two remarkably advanced calendric achievements: the Long Count and the Great Cycle. These concepts form the crux of the Mayan system and permit one to understand the evolutionary nature of Creation since its advent.

The Long Count is in essence a system of cyclical increase which culminates in what is called a Hablatun. The Hablatun is a cornerstone in the Mayan Calendar and it corresponds with what is referred to as a Heaven. A Great Cycle, also known as a Wave or Underworld, consists of 13 Hablatuns, a number that is very sacred to Creation. Furthermore, and of vital importance, exists the Sacred Round, also known as the Tzolkin, which is a 260 day calendar comprised of an interrelating sequence of 13 and 20. It becomes evident upon study that the Maya were intimately aware of the harmony that exists between the cosmos and our Solar System.

Before one can appreciate the synergy between these cycles, one must first understand our own. In doing so we must first travel back to ancient Greece and become acquainted with the work of their finest astronomer, Meton. His namesake graces the Metonic Cycle which is one of our most important cycles and is defined as follows: the number of lunar cycles, otherwise known as lunations, required for a New Moon to return to its exact astronomical point of reference, to the precise degree. Though Meton's estimations of this cycle are admirable he was disadvantaged by the lack of modern telemetry systems that we enjoy today. His estimation of the lunations required to complete this cycle fell short; he theorized 235 when in truth the count is 260.

The mystery of Maya unravels with Meton. Consider that the length of one lunation is 28 days and that there are 13 such lunations in each Solar Year. If we divide the Metonic Cycle's lunation count of 260 by 13 we are left with 20, meaning that it takes 20 Solar Years to produce one Metonic Cycle. Our lunisolar math perfectly mirrors that of the Mayan Sacred Round which consists of 13 Tzolkin Trecenta Cycles and 20 Tzolkin Day Cycles which permute to produce 260, the same number of lunations in a Metonic Cycle. The Metonic math parallels the Tzolkin math.

This connection has remained hidden because the true length of our year has been long corrupted. As was given to the great prophet Enoch by the holy angel Uriel a year is comprised of four equal 90 day quarters which are partitioned by the four equinoxes. The seasons combine for 360 days and when the four equinox days are added the result is an eternally perfect solar year of 364 days. Without dispute we understand a lunar cycle to be a perfect and eternal 28 day period. Wouldn't the solar cycle also be perfect and eternal? See that 28 by 13 is 364 and not 365! Is Creation not perfect? Has anyone ever lived a partial day?

Further correlation can be seen between the lunation count of a Solar Year and the Hablatun count of a Mayan Underworld - mysteriously they are both 13. Further still our seven day week corresponds to the seven day Mayan Creation Cycle. Our 52 week Solar Year matches the length of the 52 year Mayan Calendar Round. Our 13 lunations per Solar Year parallel the 13 Trecenta Cycles in the Sacred Round. The 20 years in our Meton match the 20 Days in the Sacred Round. The 260 lunations in our Meton pair to the 260 Days in the Tzolkin. While the parallels are striking they don't end here.

Remarkably there is also an extraordinarily synchronistic display that occurs between the sequence of the Metonic Cycle and the aspect ratio between the Mayan Underworlds - they are perfectly equivalent. The sequential reduction of time between each subsequent Mayan Underworld is always a divisible of 20 and a multiple of 13 which you will recall are the core numbers that formulate the Metonic Cycle. The planets in our Solar System also play their part; our cast of nine compliments the nine Mayan Underworlds. As well, another connection is uncovered, hidden in the synodic cycles of our planets. A synod is the time that elapses between successive planetary conjunctions from our Earthly point of reference. When we sum the mean synods of our planets and divide by the sacred number 13 we arrive at 260, the count of the Mayan Sacred Round.

By far the most staggering parallel that exists between the Mayan Calendar and our own Solar System is revealed when we compare our equinoxes to the Mayan Great Cosmic Cycle. The Great Cosmic Cycle represents the evolution of consciousness from creation to cosmic, from Zero Point to Ninth Wave, as well as a way to measure eternity. The number of this cycle is 819 and its factors are seven, nine, and 13, numbers that correspond to the seven day Creation Cycle, the nine Underworlds, and the 13 Hablatuns. To the Mayans the 819 cycle represented a quadrant of the universe. Naturally, this would mean that their cycle for the entire universe would be 819 by four, leaving us with the sum of 3,276.

Our Solar System's microcosmic relationship to the universe becomes exceptionally clear when we divide the Mayan Universal Quadrant Cycle of 819 by our Solar Year Quadrant Cycle of 91 - the answer is nine, as in, nine levels of consciousness. When we divide the Mayan Universal Cycle of 3,276 by nine we are left with 364, the precise day count of our reckoned Solar Year. What we are seeing is alchemy on a universal scale, the above being the universe and the below being our Solar System! A rational mind is left to conclude that only an unfathomably resplendent power could be conducting such an ineffably majestic celestial symphony. This power is none other than Adonai, the Most High GOD.

The true nature and operation of the universe has been long contested by the great minds of times past. These minds searched for an irrefutable pattern that could prove that the expansion of the universe is intelligent and orderly, a theory called Cosmological Constancy. I humbly present through my analytical discoveries that Cosmological Constancy not only exists but that it is exemplified by the mathematical correspondences found between the cycles of the Mayan Calendar and the cycles of our Solar System. The synchronicities are undeniable and serve as a testament to the truth that there is order in Creation, Cosmic Order. After all, cosmos is Greek for 'order.'

October 28th and Beyond

On October 28th, 2011 the world will shift. A deathblow to the false paradigm will be dealt and as it collapses a new, spiritually brilliant civilization will begin to emerge. As these Divine energies cascade throughout our planet profound personal and societal changes will occur. It is important to understand that there is nothing to fear, that the changes should be welcomed, and that fear of these changes will sabotage one's ability to succeed in the coming world. Now is the time to align with the Order that one may grow instead of dwindle. Now is the time to cast off ways that obstruct ascension that one may embrace the opportunity of enlightenment that dawns. Remember always that the end of the Mayan Calendar is a reason to rejoice!

As sure as there are cycles in the cosmos there are death and rebirth cycles here below. Accept that the death of the world we have known all our lives is a necessary and infinitely beneficial part of the Divine Plan; welcome it wholeheartedly as it leads to the Kingdom of Heaven. As some are more advanced than others now is the time to come together as a human family to help one another through this process. As the dynamics of social power become cosmically aligned new leaders will emerge. Spiritual power will lead to public power, as was always intended. Remember that we must show compassion for those who are maligned because in truth it is only they who will suffer; lead by example. For those who are awake this will be an era of personal and public glory unlike any other where increase will be experienced in all ways, within and without, above and below.

Mother Nature will also prosper as she will begin to be healed and come alive in ways never before seen as a result of this energy. The rise in consciousness will prompt benevolent extraterrestrial intelligences to view humanity as equals instead of subordinates. They will begin to select ambassadors to serve as intermediaries between races. Like all things, diplomacy will soon go cosmic.

My Message to the World

If there were one message I could deliver to the hearts and minds it would be this: look to the Heavens as there is great wisdom there! The life of the cosmos mirrors our life here below. The greatest mystery I have ever discovered unfolds for us all, eternally, each day, perfectly, and invisible to naked the eye. Raise your minds to the celestial sphere and your eyes below will change. You will begin to see perfection in all direction, purpose behind every problem, and opportunities to ascend at every angle. Astrology is the science which enables us to perceive the Order. It is a gift, a treasure, the language that translates above and below. A language kept hidden and ridiculed for long, a language I'll deliver as sweet as a song. To the best of my ability you will see what I see, my work rests in humility, repeat after me.