Brandon Turbeville
Activist Post
According to a list compiled by independent blog, American Kabuki, at least 122 banking directors, CEOs, and board members of both national and international stature have resigned since September of last year. The blog recently posted a list of all 122 of these individuals with links to the announcements and reports of their resignation.
The fact that banks have been reshuffling their personnel is, of course, nothing new. However, 122 resignations does seem like a large number, particularly when one realizes that many of these resignations are coming from relatively large institutions.
As a result, there has been much speculation and concern on the part of many observers as to what these shifts actually mean.
While it should be mentioned that the list contains resignations from some institutions that are relatively small in terms of international finance, one might also do well to remember that banks, insurance companies, corporations, and governments are often tied together by a seemingly infinite number of spiderweb connections that only become visible as certain parts of the financial relationships are unearthed.
To be clear, this writer is not suggesting that every single bank included in this list is part of a criminal conspiracy, cover-up, or act of misconduct. In fact, I am not suggesting that any of them are. However, when it comes to some institutions such as the World Bank or the Bank of England, the history of treachery is obvious and should be kept in mind as you draw your own conclusions.
In fact, it is the resignations taking place amidst these larger institutions that should be a cause for greater concern in the first place.
Indeed, the number of resignations taking place amongst large institutions such as CitiBank, Lloyds Banking Group, UBS, Bank of America, Goldman Sachs, and JP Morgan alone should be enough to turn some heads.
But there is also an alarming number of central banks included on this list as well. Perhaps the most surprising is the fact that Phillip Hildebrand, the head of Switzerland’s central bank, recently handed in his resignation. Not only that, but there have been resignations coming from several other central banks including Argentina, Kuwait, Nicaraqua, and Kenya.
Even the World Bank is now accepting the resignation of Robert Zoellick.
The truth is, we don’t know what these resignations actually mean. Are they merely coincidence? Is this par for the course in the international banking industry?
Or are we witnessing the beginning of a rush for the exits by those who are in a position to see what is coming down the pike? Considering the state of the world financial system, this would not be too hard to believe.
Or are we witnessing a panicked flight of the guilty on the eve of a coming round of real investigations? Might there be a coming worldwide financial scandal that these individuals would drastically like to avoid?
Either way, 122 resignations from September to March at least sounds like a big number. It would be nice to know exactly what the rate of resignation was in previous years. Until we are able to find that number, it might be wise for us to ask ourselves what these individuals know that we don’t.
Below is the list of resignations as compiled by AmericanKabuki.blogspot.com along with some additions at the end:
http://www.activistpost.com/2012/03/do-mass-banking-resignations-si... 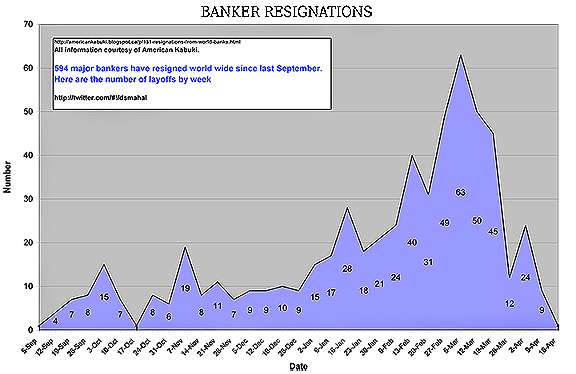 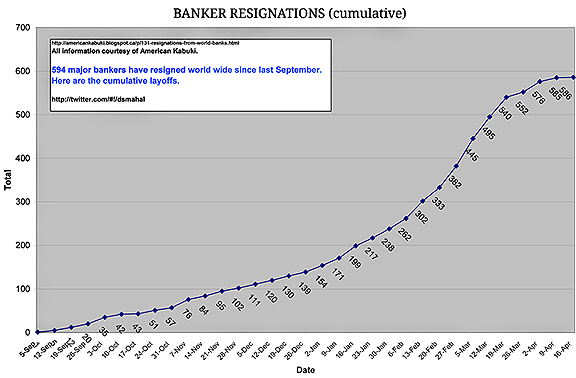 Updated 3/7/12 Huge amount of resignations today.  Special thanks to Gabriel of Facebook GLOBAL MASS RESIGNATIONS for the heads up on a number of new banking resignations  that I missed. Gabriel will be tracking Insurance, Government and Healthcare Resignations.  There's been a large number of Healthcare resignations lately.
http://americankabuki.blogspot.com/