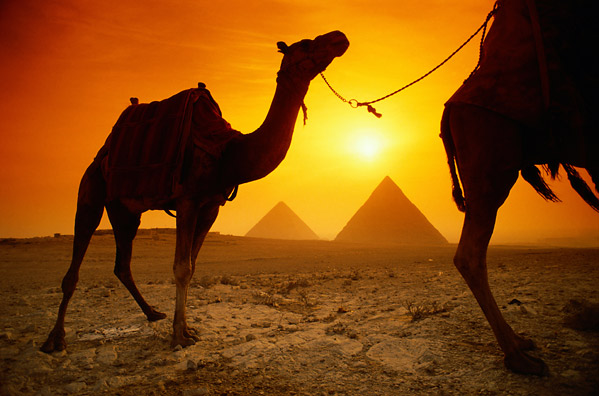 Egypt, officially the Arab Republic of Egypt, country in northeastern Africa and southwestern Asia. Most of the country lies in Africa, but the easternmost portion of Egypt, the Sinai Peninsula, is usually considered part of Asia; it forms the only land bridge between the two continents. Most of Egyptï¿½s terrain is desert, divided into two unequal parts by the Nile River. The valley and delta of the Nile are the main centers of habitation. The capital and largest city is Cairo.Located on the west bank of the Nile River on the outskirts of Cairo, the pyramids at Giza, Egypt, rank as some of the best-known monuments in the world. The ancient Egyptians constructed the pyramids to serve as royal tombs. Built without the use of cranes, pulleys, or lifting tackle, the massive structures stand as testaments to the engineering skills of their makers.

Egypt has been a coherent political entity with a recorded history since about 3200 bc. One of the first civilizations to develop irrigated agriculture, literacy, urban life, and large-scale political structures arose in the Nile Valley. The annual flood of the Nile provided for a stable agricultural society. Egyptï¿½s strategic location between Asia and Africa and on the route between the Mediterranean basin and India and China made it an important hub of international trade. Beginning in the 4th century bc, a series of conquerors brought new religions and languages to the land. However, Egyptï¿½s rich agricultural resources, pivotal commercial position, and long-term political unity have sustained a high level of cultural continuity. Although present-day Egypt is an overwhelmingly Arabic-speaking and Islamic country, it retains important aspects of its past Christian, Greco-Roman, and ancient indigenous heritage.


Author, lecturer, and guide, John Anthony West delivered a seismic shock to archaeology in the early 1990's when he and Boston University geologist Robert Schoch revealed that the Great Sphinx of Giza, Egypt, showed evidence of rainfall erosion. Such erosion could only mean that the Sphinx was carved during or before the rains that marked the transition of northern Africa from the last Ice Age to the present interglacial epoch, a transition that occurred in the millennia from 10,000 to 5000 BC.

"Egyptian civilisation was not a development, it was a legacy"

Below is an 8 part documentary made by him, titled MAGICAL EGYPT. It is simply, mind-blowing. :-)

A growing body of evidence is suggesting a missing chapter in human history. Symbolist author and Egyptologist John Anthony West explores evidence of a sophisticated science behind the unexplainable accomplishments
of Ancient Egypt. Was Ancient Egypt the inheritor of a body of scientific and spiritual knowledge from an even earlier civilization?

Author / Mathematician Michael S. Schneider discusses organic geometry and the role of the fibonacci number series in growing life. West then demonstrates the presence of the fibonacci series in the stages of construction
of the temple of Karnak - also known as the "House of Life".

Across Egypt, the many architectural, engineering, artistic and scientific wonders still defy explanation. The mysterious Oserion appears to already have been an ancient ruin when it was "uncovered" by Seti I during the construction of the Temple of Abydos in first Dynasty.

New developments in the "age-of-the-sphinx" debate. In the Cairo museum is a stella which describes reparations to the great sphinx performed by the Father of the traditionally credited builder.

Does the great sphinx conceal its own date of construction in the age of Leo?


An obscure and very ancient ruin in the deep Egyptian desert is found to contain an accurate sculpture of our
Milky Way galaxy as well as 23 of it's neighbors. It also shows the trajectory and ACCURATE DISTANCES to
significant stars in the constellation of Orion.

Could this be an alien artifact?


Episode Four - The Temple in Man


"The temple was the teaching". A look at the ancient Egyptian temple as an interactive repository of ancient teaching.

After more than 17 years on-site at Luxor Temple, the enigmatic mathematician, philosopher and modern-day alchemist R. A. Schwaller de Lubics discovered a key that unlocks a timeless teaching encoded in stone.

Does Luxor temple conseal an ancient teaching about the metaphysical anatomy of man? West explores the
controversial findings of Schwaller de Lubics and the biometric data he discovered hidden in this remarkable temple.


Episode Five - What to do in the Afterlife


Did the ancient Egyptian technology extend into mastery of the afterlife? In the Valley of the Kings, the tombs of Seti I and Tuthmosis III have been closed to the public for over a decade.

Arcane funerary texts cover the walls of the tombs with a bewildering list of spells and secrets
that allow the deceased to navigate the afterlife.

Dr. Rick Strassman, author of "DMT: The Spirit Molecule" discusses the biochemistry of the death experience and the role of the mysterious pineal gland. Our powerful interaction with DMT is shedding new light on the ancient
understanding of the "third eye" or pineal gland as the seat of consciousness.

Lon Milo Duquette discusses the strange state of consciousness known as Lucid Dreaming and its unexpected relationship with the afterlife experience.


The ancient Arabic name for Egypt was "Khemet", or "The Black Land". The western continuation of the Egyptian magical arts was called "Al-Khemet", meaning "from the Black Land".

The cradle of civilization is also the ancestral home of a high science of magic. We explore the many modern encarnations of the ancient science of perfection and the transformation of the "materia prima" of the Alchemists.

From Alchemy to Tarot, and in the many modern esoteric and mystical societies existing today, we explore the hidden thread that connects modern and ancient magic - The occult idea that consciousness is the materia prima.
The coal that turns into a diamond. The lead that becomes gold.


Twice a year, on the anniversary of the Ramses' birth and coronation day, the rising sun penetrates the temple to illuminate the four gods of creation situated at it's very core.

As we witness this rare spectacle, we gain an understanding of the ancient temple, not just as a place of worship, but as an essential mechanism of the ancient magical practices.

West is joined by bestselling author / researcher Robert Bauval at the temple of Abu Simbel. We look at the temple, statuary and heiroglyphs as examples of talismanic technology.


A comparison of ancient and modern models of the structure of the universe reveal unexpected similarities.

As our most recent scientific understanding is bringing the subatomic realms into ever clearer focus, the strange world of quantum mechanics and string theory are finding a remarkably consistent echo in the cosmology, or creation myth, of the ancient Egyptians.

Could there be complex scientific notation hidden in ancient heiroglyphics? Author / researcher Laird Scranton demonstrates an unexplainably accurate description of subatomic structure, quantum physics, cellular biology and even string theory, hidden in ancient accounts of the formation of the universe.

If Scranton's discovery proves true, it may be the most important breakthrough in Egyptology since the discovery of the Rosetta stone.


I have always believed that Ancient Civilizations were not truly ancient per say, that we are somehow going backwards. That everything is cyclic after all, nature and seasons are cyclic - why not time and humanity? This has definitely proven my believes and theory that we indeed are following the laws of nature - that everything has a cycle. And I agree, modern humanity today has too much to lose especially those in power hence we will not or should I say never see the popularization of these works till the cycle has reached enlightenment again. 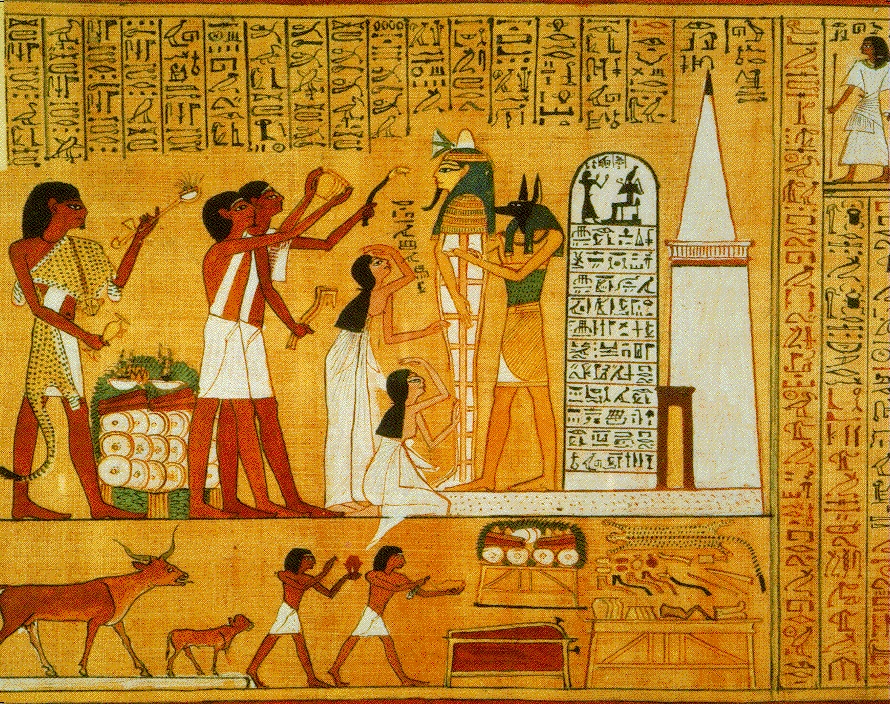