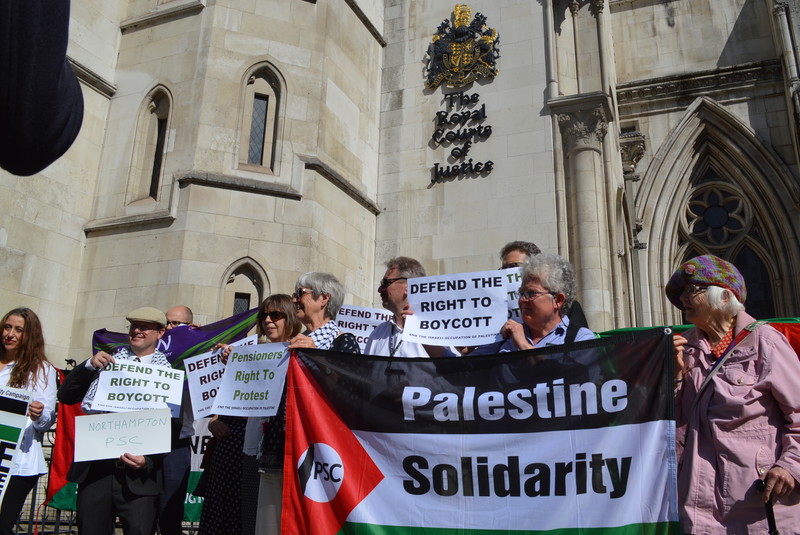 Campaigners call for the right to boycott Israel and other human-rights abusers.


The High Court in London ruled on Thursday that the Conservative government acted unlawfully in trying to prevent local councils in the United Kingdom from divesting from firms involved in Israel’s military occupation.

The successful legal challenge for the right to boycott was brought by the Palestine Solidarity Campaign in March, and was supported by War on Want, the Campaign Against the Arms Trade and the Quakers.

”We couldn’t be happier that this right has been upheld by the court,” said PSC Director Ben Jamal.

“Today is a victory for Palestine, for local democracy and for the rule of law,” PSC Chair Hugh Lanning said. “Absolutely everyone has a right to peacefully protest Israel’s violation of Palestinian human rights.”

The court ruled that the government had acted improperly by seeking to use pension law to pursue its own foreign and arms industry policy.

Jamie Potter, one of PSC’s lawyers, said, “this outcome is a reminder to the government that it cannot improperly interfere in the exercise of freedom of conscience and protest in order to pursue its own agenda.”

The full ruling can be read below.

The minister’s guidance had stated that local authorities must not use “pension policies to pursue boycotts, divestment and sanctions against foreign nations and UK defense industries … other than where formal legal sanctions, embargoes and restrictions have been put in place by the government.”

Although the document did not specifically name Israel, it was part of a series of measures, launched at a press conference in Jerusalem, explicitly intended to target BDS campaigners.

Although the government trailed it to the media as a “BDS ban,” legal analysis of the new documents showed there was nothing new in them “aside from some overblown rhetoric clearly intended to scare campaigners.”

BDS gets the goods

Local government bodies in the UK have for years been urged by Palestine solidarity campaigners to divest from companies that are involved in the Israeli occupation of the West Bank and Gaza.

French multinational Veolia withdrew from most Israeli businesses in 2015 after being the focus of a years-long BDS campaign.

Municipalities around the world had dropped it from contracts worth more than $14 billion, according to the BDS National Committee.

Councils in Tower Hamlets, Leicester, Swansea and Bristol are among those that have passed resolutions in support of BDS or condemning companies involved in Israeli settlements in the occupied West Bank, which are illegal under international law.