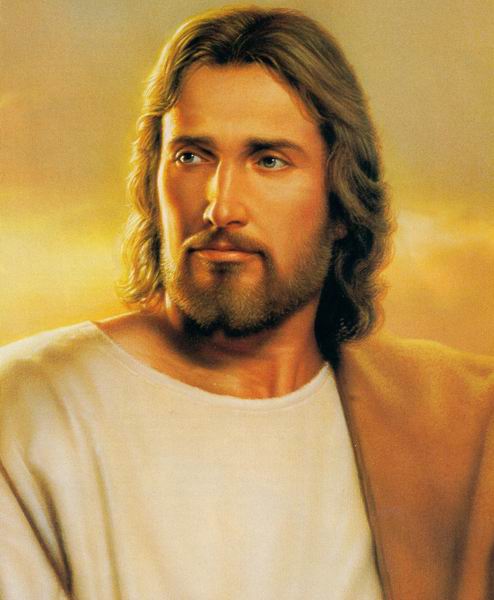 Buddha was born of the virgin Mahamaya, who was considered the "Queen of Heaven." Dean Milman, in his "History of Christianity," stated that "Buddha, according to a tradition known in the West, was born of a virgin" (Vol. I, p. 99, note). Mary and Mahamaya all gave birth to their children among strangers. He was visited by wise men who recognized the divinity of the child. He was of royal descent and his birth was announced by a star.

Werner's Encyclopedia, in its article on Buddha speaks of "the marvelous stories which gathered round the belief in his voluntary incarnation, the miracles at his birth, the prophecies of the aged saint at his formal presentation to his father, and how nature altered her course to keep a shadow over his cradle, whilst the sages from afar came and worshiped him."

Both Jesus and Buddha were presented in the temple as infants for baptism. The hymns uttered at both annunciations resemble each other.

(4) Both in childhood discoursed before teachers.

Jesus and Buddha were considered to be divine beings. Buddha is regarded by the Hindus as the ninth incarnation of the deity Vishnu, following Krishna. But Buddha started a new religion which did not emphasize "gods," but rather how people can become "awakened" or "enlightened" to liberate themselves from the cycle of birth, death, and rebirth."

(6) The mission of both Buddha and Jesus was proclaimed by a voice from heaven.

(7) Both fasted in the wilderness and were tempted. Supernatural beings ministered to each of them.

Both called their disciples with the command, "Follow me." Both sent out disciples to spread their teachings. Both performed miracles and wonders, healed the sick, fed five hundred men from a "small basket of cakes," and walked on the water.

Buddha was "about 30 years old" when he began his ministry. He fasted "seven times seven nights and days." He had a "band of disciples" who accompanied him. He traveled from place to place and "preached to large multitudes." Bishop Bigandet calls his first sermon the "Sermon on the Mount." At his Renunciation "he forsook father and mother, wife and child." His mission was "to establish the kingdom of righteousness." "Buddha," says Max Mueller, "promised salvation to all; and he commanded his disciples to preach his doctrine in all places and to all men." "Self-conquest and universal charity" are the fundamental principles of his religion. He enjoined humanity, and commanded his followers to conceal their charities. "Return good for evil"; "overcome anger with love"; "love your enemies," were some of his precepts.

Buddha formulated the following commandments. "Not to kill; not to steal; not to lie; not to commit adultery; not to use strong drink." This is a similar teaching attributed to Jesus: "Do not commit adultery, do not murder, do not steal, do not give false testimony, honor your father and mother." (Luke 18:20) Christ ignored the literal interpretation of Moses and emphasized a spiritualized interpretation of the whole law taken as a whole which is to practice unconditional love. This is similar to what Buddha did with the current teachings of those days.

Buddha preached on the "Holy Hill." Jesus delivered his sermon on the Mount. The phraseology of the sermons of Buddha and the sermon of Jesus is the same in many instances. Both Buddha and Jesus compared themselves to husbandmen sowing seed. The parable of the prodigal son is found in both Buddhist and Christian scriptures. So is the account of the man born blind. Both use the mustard seed as a simile for smallness. Buddha taught: "Perishable is the city built of sand." Jesus taught: "a foolish man builds his house upon the sand." Both speak of "the rain which falls on the just and on the unjust."

It is said that he crushed a serpent's head. This is also a Messianic prophecy described in Genesis in the Garden of Eden.

He abolished idolatry, was a "sower of the word," and preached "the establishment of a kingdom of righteousness."

(15) He taught chastity, temperance, tolerance, compassion, love, and the equality of all.

Both proclaimed kingdoms not of this world. The eternal life promised by Christ corresponds to the eternal peace, Nirvana, promised by Buddha.

(18) Both were transfigured on a mount.

(19) Both made triumphal entries, Christ into Jerusalem, and Buddha into Rajagriba.

Buddha was considered the "good shepherd, the "carpenter, the "infinite and everlasting." Buddha was called the "savior of the world, "light of the world," Supreme Being, and the eternal one.

(21) There is a legend of a traitor connected with each.

(22) Buddha is to return to Earth again to restore the world to order and happiness.

Shortly after Buddha died, two sects of Buddhism were formed. After 400 years there were twenty different sects of Buddhism. Today there are many more. Over the millennia, the teachings of both Jesus and Buddha has spawned many different sects. Each is an attempt to keep the teachings alive under new circumstances. In 1947 in Egypt, early Christian documents were discovered which were hidden for thousands of years at the time when orders from the Church called for all heretical documents to be destroyed. One of those documents was the Gospel of Thomas which is considered by scholars to be the earliest gospel ever written and the most reliable. The Gospel of Thomas resonates with a type of Christianity that remarkably resembles Buddhism. It describes Jesus teaching the disciples how to become liberated from reincarnation. The writings of early Christianity discovered in 1947, show that early Christianity contained much more diversity of viewpoint and practice than later Christians acknowledged or even imagined. Because these teachings were smothered, many Christians today are adamant that the only path to God is via the personality of Jesus and this was considered the orthodox formula.

Connected with the triumphs of these two religions there is a historical correlation worthy of mentioning. About three centuries after Buddha's death, Asoka the Great, emperor of India, converted to the Buddhist faith and made Buddhism the state religion of the empire of India at that time. This emperor did more than any other person to secure Buddhism's supremacy in the East. In the same way, about three centuries after the death of Jesus, Constantine the Great, emperor of Rome, became a convert to the Christian faith and made it the state religion of his empire. Because of this, Christianity reigned supreme in the West.

Remuset says: "Buddhism has been called the Christianity of the East." It would be more appropriate to call Christianity the Buddhism of the West. Buddha, and not Christ, was "The Light of Asia." At this torch Christians lighted their taper and called it "The Light of the World."

Catholic Bishop Bigandet, one of the leading Christian writers on Buddhism wrote: "In reading the particulars of the life of Buddha it is impossible not to feel reminded of many circumstances relating to our Savior's life as sketched by the evangelists. It may be said in favor of Buddhism that no philosophic-religious system has ever upheld to an equal degree the notions of a savior and deliverer, and the necessity of his mission for procuring the salvation of man."

Paul Ambroise Bigandet, the Catholic Bishop of Ramatha, wrote: "There are many moral precepts equally commanded and enforced in common by both creeds. It will not be rash to assert that most of the moral truths prescribed in the gospel are to be met with in the Buddhistic scriptures."

The rituals and religious structure of Catholicism resembles to a remarkable degree after those of Northern Buddhism (Lamaism) which the Encyclopedia Britannica states: "Lamaisnu with its shaven priests, its bells and rosaries, its images and holy water, its popes and bishops, its abbots and monks of many grades, its processions and feast days, its confessional and purgatory, and its worship of the double Virgin, so strongly resembles Romanism that the first Catholic missionaries thought it must be an imitation by the devil of the religion of Christ." The central object in every Buddhist temple is an image of Buddha The central object in every Catholic church is an image of Christ. Holy relics and the veneration of saints are prominent in both.
If Jesus and Buddha were to meet, they would recognize one another as fellow prophets because they were teaching the same truths.
Both stayed in the wilderness for 40 days and 40 nights and were tempted by evil, Jesus by Satan and Buddha by the demon Mara and his daughters.
Jesus's original teachings promoted peace and turning the other cheek, passive resistance rather than armed insurrection. Marcus Borg, a Christian and Jesus scholar, focuses on this basic aspect of Christianity by selecting a range of quotations from the Gospels and pairing them with parallel sayings by the Buddha. For example, whereas Jesus said, 'Blessed are the poor, for yours is the kingdom of God,' Buddha said, 'Let us live most happily, possessing nothing; let us feed on joy, like the radiant gods.' It is surprising, to a reader familiar only with the Bible, to find how similar the words of the two religious leaders actually are.
When we compare two ancient spiritual traditions like Buddhism and Christianity, what we see is a striking similarity between the narratives of the founding masters: in the case of Christianity, Jesus Christ, and in the case of Buddhism, the Buddha. I see a very important parallel: in the very lives of the [founders] the essence of their teachings is demonstrated. For example... The essence of the Buddha's teaching is embodied in the Four Noble Truths: the truth of suffering, the truth of the origin of suffering, the truth of the cessation of suffering, and the truth of the path leading to this cessation. These Four Noble Truths are very explicitly and clearly exemplified in the life of... The Buddha himself. I feel [it] is the same with the life of Christ. If you look at the life of Jesus, you will see all the essential practices and teachings of Christianity exemplified. And in the lives of both Jesus Christ and the Buddha, it is only through hardship, dedication and commitment, and by standing firm on one's principles that one can grow spiritually and attain liberation. That seems to be a central and common message.
Apart from that, there are few similarities, apart from living a simple life.
Buddha searched for the way. Jesus said "I am the Way"
Buddha searched for the truth. Jesus said "I am the Truth".
Buddha searched for a reason for living. Jesus said "I am the Life. No one comes to the Father, except by way of me." JOhn 14:6

Both claim royal descent;
Celestial bodiest announced the birth of both;
Both were tempted by the devil;
Both experienced supernatural events after the devil left;
Both were said to know the thoughts of others;
Both helaed blind men and claimed that the affliction was due to a previous sin;
Both required desciples to renounce worldly possessions;
Both had a disciple who walked on water.