How to Destroy Hate, Foster Love

Hatred torments both the hating and the hated. It is a crime against harmony and love. We CANNOT accept it

This article originally appeared on a new site about the Christian renaissance in Russia, called Russian Faith. Their introductory video is at end of this article.

Ivan Ilyin was an influential nationalist political and Orthodox Christian philosopher active in the Russian Emigre movement in Europe after the revolution. He heavily influenced Solzhenitsyn. Putin, a great admirer, personally supported repatriating his remains to Russia in 2009, and attended the consecration of his grave.

For more articles on RI by or about Ilyin, click here.

For a selection of his Christian writings on the Russian Faith site, click here.

How burdensome, how almost unbearable is the feeling that “he hates me”… How strong a feeling of one’s own weakness seizes the soul… One does not wish to think about it, sometimes with success. But even without thinking, one feels that current through the spiritual ether, that stream of someone else’s disgust, contempt, and ill will. And one does not know what to do, but one cannot forget entirely either and carries this curse throughout one’s whole life. 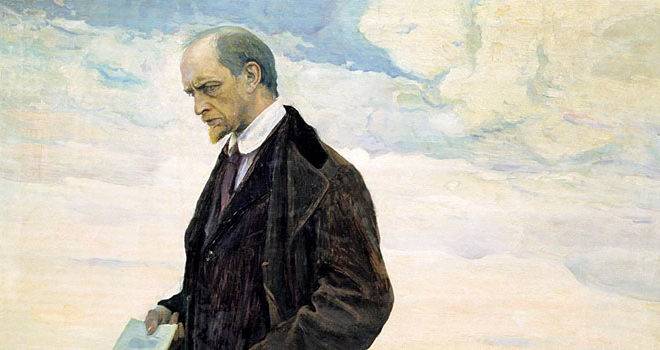 A potrait of Ivan Ilyin by the famous Russian painter, Nesterov

Every man (whether he knows this or not) is a radiant and living individual centre. Every glance, every word, every smile, and every act radiate a special energy of heat and light into the common spiritual ether of existence; this energy, which wants to be active in this sphere and wants to be accepted and allowed into other souls, wants to call back to them and build a living stream of positive, creative contact with them. And even when a man (apparently) does not express himself in anything or is just absent, we still are conscious of the rays he sends out, all the more strongly, definitively, and intensely the more significant and unique his spiritual personality is.

We first receive someone else’s antipathy when we feel, that the rays of life that we send out are not accepted by the other man, as if they are pushed away or stubbornly blocked from entering him. This alone is unpleasant and painful. This can cause some unpleasantness or even confusion within us.

There appears within the soul a strange feeling of failure, or a feeling of our own incompetence, or even one of the irrelevance of our being. Our wish of contact is cut short, the rays do not want to radiate, words cannot be found, the upswing of life is cut off, and the heart is ready to barricade itself.

Closed and unsociable people often cause such a feeling in sociable and expansive people, even when there is not even the slightest mention of antipathy. But once antipathy has reared its head, it can escalate into hostility, “coalesce” into disgust, and sink deeper into hatred; what is more, this process is fully independent from the fact whether we have deserved this hatred by some act of ours or no…

A man who has once seen eyes burning with hatred will never forget them… They speak of personal anger and bode ill; and a man who sees them and feels their weight on him does not know what to do. A ray of hatred is a ray, for it burns, glistens, is charged with hatred, and is directed from one spiritual hearth to another.

But the hating hearth burns as it were with a black fire, its rays are dark and dreadful, and its energy is not lifegiving (like in love), but lethal and destructive. One feels a frozen convulsion of life behind those eyes, a torturous hostility that wants to hurt the other and is already carrying that pain with it.

And when one tries to figure out what it is that is torturing the other, one realises in horror that he is dreaming of seeing oneself dying in agony, and is tormented by the fact that it hasn’t yet happened…

I look into those hateful eyes and see, that “he” cannot stand me, that “he” is pushing away my lifegiving rays with spiteful disgust, that “he” has drawn a line of separation between himself and me, and that he considers that line a sign of a final cleavage, on one side of which is he, bathing in tireless ill-wishing, and on the other side am I, insignificant, disgusting, despicable, eternally not completely destroyed, and between us an abyss…

Having entered the dead end of his hatred, he has steeled himself and gone blind. When he encounters any display of life, he answers it with a murderous “no”. All his rays that are directed to me are pregnant with this “no”, and this means, that he is not accepting rays from me, that he does not forgive my being, and that he cannot tolerate my existence, totally and by no means.

If he could, he would annihilate me with his gaze. He is possessed by an almost maniacal idea of my eradication: I am guilty, totally and for ever, and I do not have a right to life.

As Lermontov expresses it: “the world is too small for the two of us…” [1] In general, this is a spiritual wound, a monstrosity, a tragedy…

Where does all this come from? Why? What have I done to deserve this hatred? And what should I do? How can I liberate myself from this binding curse that is auguring me all kinds of ill and threatening me with calculated destruction? Can I disregard his obduracy, walk past, and try to forget this black anger? Do I have a right to that?

How can I liberate myself from this oppressive knowledge that my existence has caused such a spiritual sickness, such a spasm of disgust in someone else?

Yes, but is it possible at all to control these feelings? Is it possible to reach the soul of the one who hates and dim or transform his hatred? And if it is, then how can one do it? And where can one find enough strength and spiritual adeptness?

When I encounter real hatred of me in life, I primarily feel a feeling of great unhappiness, and then anger and a feeling of my own impotence, after which I experience an urgent feeling of going away from the one who hates me, disappear from his eyes, never meet him again, and know nothing more of him. If this is successful, I quickly calm down, but then I notice that in my soul some dejection and heaviness remains, as the dark rays of his hatred are still overtaking me and reaching me through the common ethereal space.

I then begin to involuntarily feel his hating soul and see myself in its dark rays as their goal and victim. It is difficult to withstand this feeling for long. His hatred is not just his unhappiness, but mine as well, the same way that unhappy love is not just the unhappiness of the one who loves, but also of the one who is loved. It is not just he, the hater, who suffers from his hatred, but also I, the hated.

He is already humiliated by his condition; his human dignity has already suffered from his hatred. Now, this humiliation is supposed to take me as well. I cannot allow this.

I must busy myself with this matter, clear it up, pull through it, and try to transform and ennoble this painful passion. A wound has formed into the world’s spiritual ether: it is necessary to heal it.

We cannot, of course, arrange the thoughts of others, and, truly, it is not easy to find the right path and proper spiritual strength for solving this most difficult task… But there is one thing I definitely know: that this dark fire must be put out.

He should forgive me and make up with me.

He should not only “gift me life” and make amends with my existence, but he should also feel happiness because of the fact that I live in the world; lastly, he should give me the opportunity to feel joy at his being. For as the great Orthodox sage Seraphim of Sarov said, “man is joy to man”… [2]

1) First, I must find and define what I could have done to deserve this hatred. How could his potential love for me transform into disgust, and his healthy respect for me into contempt? For we are all born for common love and called to mutual respect… READ MORE >>>>