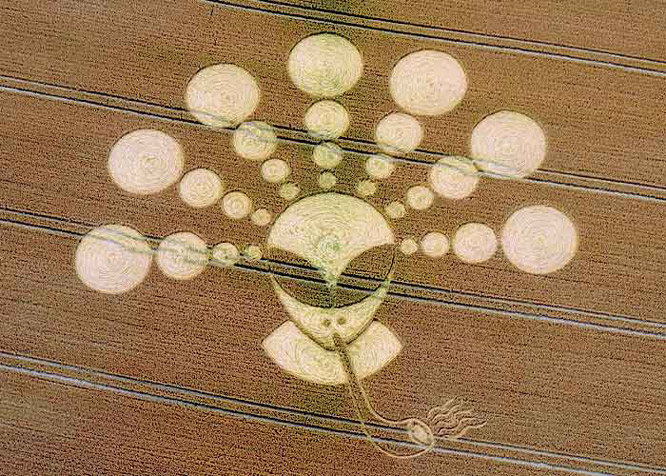 Ok, if you thought that SpaceGoatFarts entity was strange, then get ready to taste that same flavor at a universe level.

The link at the bottom of this page leads to page two of this article. This is a deliberate arrangement to focus attention on the following key points to remember when viewing the image that is NOT at page two, but is reachable from there.

Remember to think about how you are reacting as you first see the Giant Hint from our space alien brothers. Remember to look and count stuff. It was instantly apparent to me that part of the message refers to the 28 day lunar cycle. The whole seven by 4 with waning involved...

Then there is the many other layers of archetypes that jump out. The 'relaxed grip'. The connection by counting to the development process of the chakra system of both humans and universe (hint: 7 chakras, and each goes through 4 specific stages of development in the enlightenment process).

Then there is the whole question of 'assumed context'. If this is a message from our space alien brothers, then what do they know? It is clear what message they intend to convey, but why stress this aspect of human behavior?

Is something wicked this way coming such that we need to take the steps suggested? And are we meant to continue it as a solid practice for the next 28 days?

Are they saying that "if ever, then for love of universe!, Start NOW! and continue for the next month..."

Or, alternatively, are they saying "we have seen your future, and the next twenty-eight days will be soooo intense that we advise you start right now and..."

So returning for a moment to the now, if not the here.... it may be noticed that recently i had written that over these next 3/three weeks the 'high strangeness' of universe would ramp up, and this would be led by 'all things unknown from space'. Even the most mean-spirited of readers are likely, after following the link below to its final destination, grant me that the 'high strangeness' of universe is definitively ramping up... and, that i called the timing.

We are not yet more than barely begun....

Here is the link. Now bear in mind that we had nothing to do with the manifestation of this message from space aliens, or its timing. Nor did we have any sure and certain foreknowledge of its content. That is our story and we are sticking to it.

It could also be, of course, that the space aliens are saying to those cognoscenti, "Yo, shit's on fire! Be seeing you in 28 days."

Asymmetrically, i think i shall go and continue gnawing on universe.

Instructions from the space dudes...

Comment by simpleman on July 30, 2011 at 11:53pm
Look at the squiggly lines at the end. It looks like something coming out and not going in. This could be a wind instrument. Meaning the message has to do with sound.

They are saying it ok to smoke bud every 28 days..

Thanks for sharing this Trudy.

also the poster is cool too, Ravdivo.

This one is apparently poster from '70s: