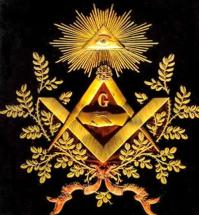 There are Freemason lodges all over the community of small towns I live in, and until recently, I never knew anything about Freemasonry.

I don’t remember much discussion about it in school; there may have been a slight mention of it but I never learned anything about it that stuck with me.

I definitely don’t remember learning in school thatGeorge Washington was a Freemason, and like most other people, I’ve been unaware of the massive role Freemasonry has played in United States history.

More Than Meets the Eye

There’s more to this collective of fraternal organizations than meets the eye. As the information we’ll learn here suggests, it was infiltrated long ago by a malevolent “secret society of men” that to this day is bent on world domination through covert secrecy. We’ll learn more about this secret society of men later in this report.

Since Freemasonry was infiltrated and its greatest secrets probably aren’t revealed to the most prominent members chosen by the eerie secret society that underlies it, I’d imagine most local Masonic lodges are benevolent. But I can’t say for sure.

I’ve read testimony from an apparent Illuminati insider who said that the group operates at the local level, but this doesn’t necessarily mean your local lodge is performing rituals or worshipping Lucifer.

By and large, Freemasonry has been corrupted. However, it may have originally been harmless and I’m sure many members on the local level are good people who are unaware of what their organization is associated with.

Just like my article on the Rockefellers and Rothschilds, the information for this report comes from David Wilcock’s Financial Tyranny: Defeating the Greatest Cover-Up of All Time.

The information obtained for the Rockefeller/Rothschild report came from section 1 of the document, and this information comes from section 2, where David dives into the esoteric history behind what some people call the New World Order.

If Masonry is just a regular organization that’s never had anything to hide or any reason to deceive the public, then why was one of its prominent members murdered for revealing its secrets?

In 1826, a book with information about the first three degrees of masonry was published by Captain William Morgan in an effort to expose some of the secrets he vowed to protect.

The book, titled Illustrations of Masonry by one of the Fraternity Who has devoted T..., was released in Batavia, NY on an independent label, and Morgan’s fellow Masons quickly responded.

Masons at the time were taught that anyone who revealed their secrets did so under penalty of death. As a result, Morgan was kidnapped and murdered by Masons for publishing secrets they didn’t want the public to know.

David Wilcock shares a picture from Bilderberg.org of an actual Freemason “meditation room” from around this time. It looks disturbing, and I can only imagine the kind of ‘meditation’ that happened there. 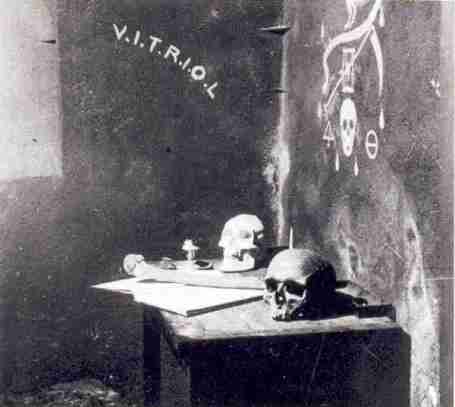 Most of you are probably familiar with the word vitriol, used to express an intense form of hatred. However, the word in this picture is also an acronym for something much more interesting. One of David’s sources, Watch.pair.com explains what the acronym stands for.

Among all races of mankind, back to the dawn of time, there existed a tradition concerning the existence of a Sacred Land or TerrestrialParadise, where the highest ideals of humanity were living realities.

This concept is found in the most ancient writings and traditions of the peoples of Europe, Asia Minor, China, India, Egypt and the Americas. This Sacred Land, it is said, can be known only to persons who are worthy, pure and innocent, for which reason it constitutes the central theme of the dreams of childhood.

The road that leads to this Blessed Land, this Invisible World, this Esoteric and Occult Domain, constitutes the central quest and master key of allmystery teachings and systems of initiation in the past, present and future. This magic key is the ‘Open Sesame’ that unlocks the door to a new and marvelous world.

The old Rosicrucians designated it by the French word VITRIOL, which is a combination of the first letters of the sentence: `VISTA INTERIORA TERRAE RECTIFICANDO INYENES OMNIA LAPIDEM,’ to indicate that ‘in the interior of the earth is hidden the true MYSTERY.’

There’s a chance this is what the Freemason ‘v.i.t.r.i.ol.’ pictured above represented, and as David writes, the interior of the earth is traditionally associated with hell.

A lot of people, including Masons, were outraged when Morgan was murdered. This ultimately led to the defection of 45,000 out of the 50,000 members of various lodges, and in less than ten years, pretty much every lodge in North America – over 2,000 – were shut down.

Nobody took Morgan’s murder lightly, and an anti-Freemasonry movement would soon sweep the nation.

David Wilcock points out that this mass defection is unsurprisingly absent from history books.

“This [defection] is an incredibly important moment in American history.It all happened roughly 180 years ago. I never heard a word about it in the Rockefeller-financed American public educational system.”

I’d imagine there’s a reason they don’t want us to know about it, and if it were up to them, we’d never think about Freemasonry or any secret society.

It’s obvious they don’t want us to know what they’re up to, but as Damian Marley put it, “they’re not really moving crafty”. They hide their symbolism out in the open and laugh at the fact that nobody questions it, but people are finally asking questions and they don’t know what to do about it.