Focus on the Fed! by Tony B 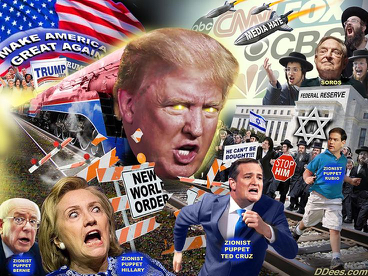 Focus on the Fed!
by Tony B
(henrymakow.com)
All the billions of words about Trump are meaningless.  Unless and until people are willing to actually think, which means getting outside of the box created by the world owner criminals to corrupt their brains, there will only be more confusion.
To understand the U.S. political situation people must be willing to understand that AMERICANS DO NOT VOTE FOR THE PRESIDENT, nor for many other high offices when not convenient to our owners.  At least one of these arrogant bastards, several decades ago make the unguarded, because true, statement:  "AMERICANS ARE TOO STUPID TO ELECT THE PRESIDENT, WE DECIDE WHO WILL BE PRESIDENT."  Until you face this simple fact you cannot understand politics because you are forever searching for what exactly it was that got this person the vote and not that person.
Note carefully the following:  IN THIS COUNTRY (and undoubtedly most others) THE PARTIES ARE NOW OWNED OUTRIGHT BY THE ROTHSCHILD CABAL SEATED IN ITS CITY OF LONDON.  NO ONE CAN BE NAMED ON A BALLOT WHOM THEY DO NOT OWN.  ALL "VIABLE" CANDIDATES ARE THEIR PROSTITUTES.  ALL, NO EXCEPTIONS.  Is everyone too brain dead to see that no matter who is put in what office the direction of the politics NEVER CHANGES?
It is no minor detail that Hillary had been promised this office by that cabal for decades.  Have all forgotten that early on in the last election this woman, who could not fill a small room with supporters, was being handed a fake "landslide" victory?  The lying media was handing her states almost before the voting began.
As opposition to her, the tactic decided upon, and publically acknowledged, had been someone who would spout "right wing fanaticisms" as, believing their own deceitful lies or else their success in selling them, the people would surely be turned off by this noise.  It should be obvious how that succeeded from the huge audiences Trump attracted while Hillary had to resort to depraved but highly promoted entertainment to fill a room.
Then there was an odd election day happening.  Someone or some group, real unsung heroes in some ways, began dumping to the public extremely damaging information about Hillary and Co. involvement in child trafficking, child sex, child sacrifice to the devil.  ALL VERY TRUE.
This leading UP THE LADDER OF WORLD CONTROL, not down it.  To an extend that the cabal, the central promoter of this satanic hell, realized they may all shortly be hanging from lamp posts in their various nations if they did not stem the exposures which they had to know concerned their No 1 satanic choice as president.  The were actually forced to change their choice, a first since they grabbed power.
THEN THERE WAS A SUDDEN REVERSAL OF THE MEDIA "VOTE COVERAGE" and those states so happily handed to Hillary were grudgingly pulled back and became "not sure" and finally given to Trump.
So what actually happened?  Did the people vote for Trump?  Well, maybe but that doesn't matter at all.  WHAT MATTERS IS THAT THE CABAL FELT FORCED TO DUMP THEIR CHOICE AND PUT IN THEIR SECOND STRING PROSTITUTE.
So what is all the constant blather about?  True, from the campaign fanatical flight to Trump of the populous and flight from Hillary, Trump likely was the intended choice of probably 95% of the voters.  But does it matter?  HE IS OWNED BY THE SAME CABAL THAT OWNS HILLARY, ET AL.  HE WILL DO AS HE IS TOLD.  UNTIL THE CABAL IS ELIMINATED NOTHING WILL CHANGE FOR THE BETTER.  PERIOD.
Why waste time, energy and resources on a president, any president, who will never be YOUR CHOICE unless you work to get rid of the Rothschild cabal.  The number one requirement for this to happen is TO FORCE YOUR GOVERNMENT TO CREATE AND CIRCULATE REAL MONEY AS THE NATION'S MEDIUM OF EXCHANGE INSTEAD OF THE INSANE BORROWING OF NON-EXISTENT "CREDIT" FROM THE ROTHSCHILD FRANCHISES SUCH AS THE FEDERAL RESERVE, the real seat of the satanic power of this cabal..
ShareThis Facebook Tweet Google + Email