Is crop circle message from the stars?


A message from an alien race or just a freak meteorological phenomenon?

Whatever the reasons one Christchurch resident says he is keeping an open mind about how a crop circle came to appear in the fields behind his house.

The design, which is reminiscent of a compass, is fairly simple compared with some more elaborate formations.

Peter Hammond, who lives in Hinton near to the Old Vicarage said he’s never seen anything like this in the neighbouring cornfields.

His wife Jacqui spotted the unusual symbol on Sunday morning after a lashing of rain during the previous evening.

“Ultimately it could be local children who are doing it for some fun, but who knows? I’m keeping an open mind, plus I think we would have seen or even heard them out there.

“We never see anyone out there except when they come and harvest it. It’s really quite interesting.”

Some of the theories behind crop circle formations include a whirlwind, earth energies, underground archaeological circumstances, hoaxes, military experimentation and alien invasion. 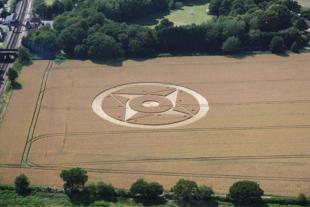 The above crop circle appeared last sunday night. This crop circle is a 20 minute drive from my house so we hope to go down & take a peek!
I love the explanation that it might be "local children doing it for some fun" we really have parents here who allow their children to play in corn fields in the middle of the night during torrential rain - but only if those children are mathematical geniuses fully capable of creating a symmetrically perfect circle just for a laugh!!

Comment by Magenta Pixie on July 18, 2009 at 6:31am
Quite true Simone. One can meditate to the heart's content individually or in groups and no one can take your power away unless you "think" they can. Mass meditation is extremely powerful - we can do anything when we pool together our combined resources and stand united. The dark cabal/illuminati groups know this and will do their bit to make us think coming together in this way is somehow negative.

Regarding "Fire the Grid 2" specifically - one needs to look at why this has come about and it's intended purpose. Should you decide to take part then use focus, intent and the heart energy. Put protection in place if you feel you need to - the confident ones who know they can work in that space freely without fear won't need to use conscious protection as they know it is always there :)

Comment by Magenta Pixie on July 17, 2009 at 6:03pm
Regarding "Fire the Grid 2" follow your hearts, guides, intuition on this - there is no "yes" or "no" answer than you can take from anyone else on this (or their guides) the entire energy here is created for many reasons and one is choice and self empowerment. If someone tells you that you should or should not participate in fire the grid 2 they are taking YOUR power away - the decision is yours. Stand in alignment - take that calm stance and look within - still confusion and just feel - you will know what to do.

Torz - Durdle Door isn't too far from me! It's truly lovely there and has an amazing energy - have a great time :) 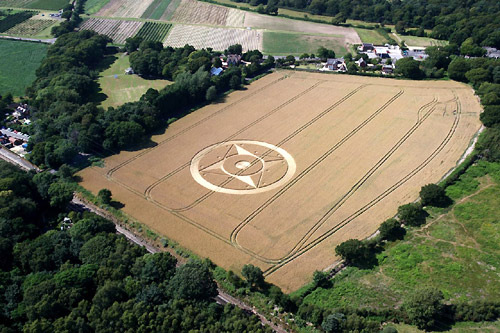 Comment by patrick on July 17, 2009 at 5:47pm
Hi Majenta, if you have the time could you give us a 'yes' or 'no' to doing the Fire the Grid 2, there seems to be some confusion developing about it. Love your prescense here, and thank you.

Comment by torz on July 17, 2009 at 5:31pm
Pixie, we are off on a 2 week holiday to Durdle door next Wednesday.. taking in 3 days at Camp Bestival half way through...shame we are not closer, I would drop in for a cuppa my love... would love to have a good chin wag with you... we plan on taking all the 6 kids into a crop circle on the way home... that should shake them teenagers out of their "nothings going to happen mum, your just bats attitude!!"
I just hope that nothing major happens whilst we are away... I've kinda made the daily update via the net a part of my daily life.... have been banned from taking the laptop so two weeks is going to be a VERY long time!!!

Still the views of the sea from the campsite at Durdledoor and the star gazing nights around a fire should just about make up for it..

Will miss all the news from the REAL world but I'm sure I'll survive...