In the last shot of Avatar, someone's closed eyes snap open. That's the climax and the message of James Cameron's first fiction feature since 1997s Titanic: Look around! Embrace the movie - surely the most vivid and persuasive creation of a fantasy world ever seen in the history of moving pictures - as a total sensory, sensuous, sensual experience. The planet Pandora that Cameron and his army of artist-technicians have created - at a budget believed to be in excess of $300 million - is a wonder world of flora and fauna: a rainforest (where it never rains) of gigantic trees and phosphorescent plants, of six-legged flying horses, panther dogs and hammerhead dinosaurs. Living among these creatures is Pandora's humanish tribe, the Na'vi: a lean, 10-ft.-tall, blue-striped people with green eyes, or what mankind might have been if it had evolved in harmony with, not opposition to, the edenic environment that gave rise to its birth.

It's the year 2154, and Pandora, a moon of the Alpha Centauri star, is the reluctant host to an expedition of Americans seeking to mine an incredibly valuable rock called unobtainium - a joke term, coined in the 1950s referring to any kind of material that's unavailable or impractical to use, that Cameron employs to locate his movie among science-fiction adventures of the period. The expedition, headed by sleazy entrepreneur Parker Selfridge (Giovanni Ribisi), contains scientists, working for Dr. Grace Augustine (Sigourney Weaver), and a Blackwater-type security force led by the malevolently macho Col. Miles Quaritch (Stephen Lang). The scientists have hatched "avatars," which look like Na'vi but blend their DNA with that of humans, who will steer them by remote control; "dreamwalkers," they're known as. Grace is entranced by the Na'vi's aristocratic gentility, but to Selfridge and Quaritch they are "blue monkeys", "savages," "an aboriginal horde." Or for want of a better word: Disposable. (See the top 10 movies of 2009.)
The new guy in this program is Jake Sully (Sam Worthington, last seen going up against machinery in Terminator Salvation), a paraplegic ex-Marine whose dead identical twin brother had been in the project. Since Jake has the same DNA, he's chosen to man his late brother's avatar. Grace wants Jake to befriend the Na'vi and help her unearth precious biological samples; Quaritch orders him to become a secret spy, as part of the company's plan to drive the tribe away from a sacred tree, under which can be found vast reserves of unobtainium. In this double role, Jake meets Neyfiri (Zoe Saldana), daughter of the tribal chief. At first suspicious of his motives, and contemptuous of his clumsiness - "Ignorant, like a child," is the way she puts it - Neyfiri is nevertheless impressed by Jake's adaptability. Somehow he has an affinity for this place, for the Na'vi and for her. Some day he will be their savior.
For me to say that Avatar is better than Titanic is not the highest possible praise. I was no ardent fan of Cameron's grafting of a poor-boy/rich-girl love story tacked onto the true saga of that doomed ship which set sail from Southampton back in 1912. But it became a night to remember with enough moviegoers to become the all-time top-grossing film with a take of just over $1.8 billion (though it ranks sixth in real dollars, after Gone With the Wind, Star Wars, The Sound of Music, E.T. The Extra-Terrestrial and the 1956 version of The Ten Commandments). What Cameron earned from Titanic's enormous success was the cachet (11 Oscars, tying the record with Ben-Hur and The Lord of the Rings: The Return of the King) and cash, to actually make Avatar, which has been called the most expensive picture ever made (though, again in real dollars, that record is probably held by 1963s Cleopatra). That shouldn't matter to viewers. The democratizing principles of the box office is that moviegoers pay the same amount to see Avatar, in its 2-D form, as they did for Paranormal Activity with its $11,000 budget. The only question they need have is: Is the movie worth it? (See TIME's Holiday Movie Preview.)

I say yes; for Avatar is a state-of-the-art experience that, for years to come, will define what movies can achieve, not in duplicating our existence but in confecting new ones. The story may be familiar from countless old movies, from those made out of Hollywood such as Dances With Wolves (an American grows sympathetic to the tribes he was meant to annihilate) to Apocalypse Now (and any number of anti-imperialist war epics), through to those made abroad, like this year's District 9 set in South Africa (where a human becomes part-alien and is hunted down by his old own kind). Some of the dialogue in Avatar's opening sequences may be on the starchy side - Cameron was never a great director of actors nor sympathetic to their sensitive needs - but objections shrink to quibbles, and then simply disappear, in the face of the picture's unprecedented visual flourishes.

Once again Cameron has devised a romance similar to Titanic's - an American grunt falls in love with a Na'vi princess - but this time with far more emotive power. Instead of embracing on a ship's prow, they ride their banshee steeds in ecstatic communion across the Pandoran sky. Think of them as the prince and princess of the world. Worthington, an Australian actor who had the second lead in the recent Terminator movie, has little of Leonardo DiCaprio's star power; but the resolve and good nature he radiates make Jake one of those ordinary heroes who rise to extraordinary heights. Saldana, though encased in CGI blue throughout the movie, manages to be the movie's driving force: yet again in a Cameron film, we find a strong woman seeking a man whose strength she can tap. But unlike the tryst between DiCaprio and Kate Winslet, this love affair has consequences. It is not a footnote to history; it makes history, as two species merge to save a planet. (Read: "King of the (Blue) World".)
And by a planet, Cameron clearly means our planet. Among his activities in the dozen years since Titanic, the director made two underwater documentaries (Ghosts of the Abyss and Aliens of the Deep) that marked him as both an explorer and a conservationist. Avatar brings his social concerns to the surface. This is not only the most elaborate public-service commercial for those of the tree-hugger persuasion; it's also a call to save what we've got, environmentally, and leave indigenous people as they are - an argument applicable to the attempt of any nation (say, the U.S.) to colonize another land (say, Iraq or Afghanistan). The rooting interest in Avatar is for the Na'vi, and against the American ex-soldiers whose job it is to police the planet. When some of them die, in the battle that consumes the final third of this 2hr.42min. extravaganza, you're meant to cheer. And you will. (Read Techland on Avatar.)

That climactic face-off is stage-managed for maximum thrills, as the creatures we met in the first part of the film join the Na'vi in opposing the rotten humans. But the supreme joy of Avatar is in its long central portion: a safari through the luscious landscape of Pandora. After all those years on the water (with Titanic) and underwater (with The Abyss and his two documentaries), Cameron has surfaced to put his vision of Pandora on screen. It's an impossible but completely plausible and seductive world that invites your total immersion. Don't resist it; sink in and fly with it. All Cameron asks is that you open your eyes. 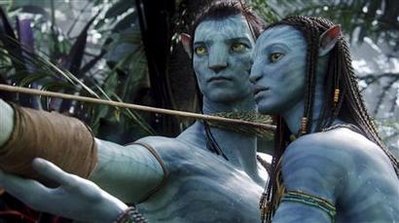