An Eagle named Freedom and his caretaker, Jeff Guidry. Hope you enjoy this beautiful story. 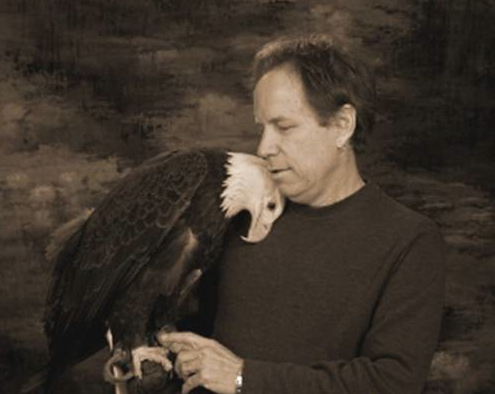 CIRCLE OF HEALING
By Jeff Guidry
Every day at Sarvey Wildlife Center we witness first hand the incredible battle for life that our animal brothers and sisters go through. This is a story of one Bald Eagle's magnificent spirit and sheer will to live.

It was mid-summer when a call came in reporting a fledgling Bald Eagle had fallen out of a nest on a Seattle golf course. Our very own Crazy Bob went to the rescue and transported her to the Center. She arrived with two broken wings. When asked to take her to the vet, I jump at the chance.

When I load this hurt and terrified baby into the car, she neither whimpers nor fights; she can't even stand. This is not a good sign; she is obviously in very bad shape. As I drive to Sno-Wood Veterinary Hospital, I constantly look back to check on my very special passenger. She stares at me with big beautiful brown eyes, her mouth slightly agape. I drive a little faster—this Bald Eagle must live!

She is operated on and has both wings pinned; they are now immobile. Back at Sarvey we lay her in the bottom half of a huge carrier filled with shredded newspaper for support.

The fight for her life begins.

Twice a day a tube is pushed down her throat so that food and medicine can be pumped into her. A week goes by with no change; she still cannot stand up. At three weeks, there's a slight change, but it's for the worse. I'm getting scared for this young Bald Eagle.

Working at the Center, you begin to recognize a look, a look that indicates death is winning. This bruised and broken Bald Eagle was losing the battle but not her dignity. The struggle for her life was not over.

Every chance I get I talk softly to her, telling her to hold on, to fight, to live. Why I felt such a connection to this particular eagle, I do not know.

Four weeks go by and she is still on her belly. There is nothing so heartbreaking as seeing the life force of this majestic bird slowly slip away.

At five weeks we are approaching the end.

Sarvey Wildlife Center believes in giving every soul that comes in a chance to live; but when it is painfully clear that death is the only way out, the decision is made to let that particular spirit continue on its journey. We were at this juncture; this beautiful baby eagle was given one week to see if she could, or would, stand up. This was a crushing blow. Every day that next week I checked to see if she was up. The answer was always the same... "No."

On the following Thursday I could barely face going to the Center. As I walked in not a word was spoken but everyone wore a huge grin. I raced back to the young Bald Eagle's cage, and there she stood in all her glory!

After another week the pins in her wings were removed. Her right wing was perfect, but her left was not. She couldn't fully extend it. We tried physical therapy and hoped a little time was all she needed, but there was no significant progress. Her wing was too badly damaged. She would never fly, never soar the skies with her people. At least her life was saved, but for what? Was she doomed to live her life in a cage? Not exactly, for this was a special soul.

Bald Eagles normally want nothing to do with humans and will go to great lengths to get away from them. This girl liked people; she wanted to see what you were doing, to follow where you were going, and to see whom you were going with. She was very curious.

About this time our director suggested that I try to glove train her. She had the right temperament; maybe she could do educational programs. Wouldn't that be something? Very few eagles are able or willing to be handled, much less remain calm in front of large crowds. The work began.

I started getting her used to the glove, a little at a time. At first she was thinking, "OK, I'll step on your hand but only with one foot." Then, "OK, I'll use both feet but only for a second." Later, "Yeah you can take me part way out of my cage, then I'll jump right back in." And finally, "OK, I'll let you walk around with me on your arm. Hey, this is fun!"

At this point, every day a volunteer would take this Bald Eagle out for a cruise around the clinic. It was time for her final test—jesses, the leather straps that attach to the ankles of birds-of-prey to give control to the handler and to protect the bird from injury or escape. I put the jesses on her—a piece of cake. It was as if she were born with them on. This was certainly a very mellow Bald Eagle.

Now it was almost time for her first program, but she needed a name. None that we could come up with seemed right, and then Paula, a volunteer, said, "Hey, what about Freedom?" That was it; that was her spirit and her spirit was why grandfather sent her to us. She was ready.

Freedom is now four years old and one of Sarvey Wildlife Center's premier ambassadors. She clearly enjoys our programs and really knows how to turn on the charm. She is a star. Freedom has been on national television, on the front page of major newspapers, and is known across the country.

She is also one of the great loves of my life. She will touch her beak to the tip of my nose and stare into my eyes. At that moment our spirits are one. It is a magic moment. We have been soul mates ever since she came in. This is a very special bird.

I am the luckiest person on Earth.Thank you, Freedom.

(editor's note)...Jeff said, "Why I felt such a connection to this particular eagle, I do not know."

Now we all know why:

Freedom is alive because Jeff fought for her life, and there is no doubt that Freedom sensed his love and commitment. Jeff gave Freedom the support she needed to want to live.

When Jeff was later diagnosed with a serious illness requiring chemotherapy, he found himself turning to Freedom for support. Two or three times a week, whenever he felt well enough, he would drive from Bothell to Arlington to walk with Freedom around the grounds. Now it was Freedom's turn to give Jeff a reason to fight for his life.

Only a short time ago Jeff was informed there was no trace of the disease left in his body. He immediately left for the Center.

When he took Freedom out of her flight, she did something she had never done before: She extended her wings and wrapped them around him.

The circle of healing was now complete.

I never forget the honor I have of being so close to such a magnificent spirit as Freedom’s.

On a side note: Jeff says that he has many experiences when people who are sick come up to Freedom when the are out, and Freedom has some kind of hold on them. Jeff reports, "Once I had a guy who was terminal come up to us and I let him hold her. His knees just about buckled and he swore he could feel her power coarse through his body. I have so many stories like that.

Comment by nonya on October 19, 2011 at 3:02pm
Can you stop using such enormous images in your blogs? They show up on the main blog page and push down other members posts. Thank you. I would appreciate it.