Aerosol Crime and Cover Up Exposed...share far and wide! 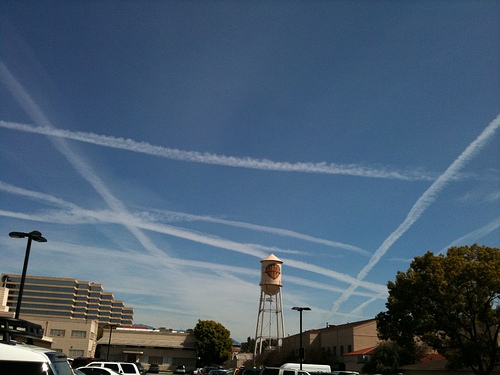 STRANGE DAYS STRANGE SKIES
LIFE IN THE TIME OF CHEMTRAILS 1997-2010: YOU ARE NOW BREATHING ETHYLENE DIBROMIDE, VIRALLY MUTATED MOLDS, NANO-PARTICULATES OF ALUMINUM AND BARIUM AND CATIONIC POLYMER FIBERS WITH UNIDENTIFIED BIO-ACTIVE MATERIAL: "We the people have not been warned, advised or consulted but are certainly vulnerable to the outcomes." Lightwatcher.com "Biologic components have been reported in airborne samples that include: modified molds, desiccated red blood cells and exotic strains of bacteria" Additionally, award winning investigative reporter, Will Thomas, has reported findings of over 300 types of virally mutated fungi in the chemtrail fall out. The Idaho Observer has reported findings of 26 metals including barium, aluminum and uranium, a variety of infectious pathogens and chemicals and drugs including sedatives in chemtrail fallout. Dr. R. Michael Castle reports the finding of cationic polymer fibers. Dr Hildegarde Staninger and Dr. Rahim Karjoom have reported findings of tiny parasitic nematode eggs of some type encased in the fibers. Additionally Drs. Staninger and Karjoom and researcher Jan Smith have reported findings of self-replicating nano-machines and rivers of silicon running wild through the bodies of the Morgellons infected. Researcher Clifford Carnicom has reported finding chemtrails fibers & abnormal blood cells that are an exact match with the bizarre fibers & blood cells found in those suffering from Morgellons Disease. Welcome to the brave new world of toxic skies, weather control, mind control and population control through the use of chemtrails modulated with electromagnetic frequencies generated by HAARP. Our health is under attack as evidenced by the skyrocketing rates of chemtrail induced lung cancer, asthma and pulmonary/respiratory problems as well as the emergence of a bizarre and frightening new plague, Morgellons Disease, an infection with a previously unknown agent that appears to be a synthesis of a bio lab created pathogen combined with self-replicating nano-technology. Over 60,000 families in the U.S. are now infected with Morgellons. I am one of the infected. My health and the health of my family has already been drastically affected. There is a main-stream media blackout on this subject so the only way to get the word out is by word of mouth. Realized or not people are already dying from chemtrail related illnesses. People are dying from Morgellons Disease. During this time of chemtrails a shocking drop in general life expectancy in the U.S. has occurred. This situation presents an immediate and serious threat to you, your family and loved ones. We must join together to stop this insane program of chemtrail spraying now. Some of you reading this may be in a position of influence and power to take significant action to bring chemtrails to a halt. Everyone can do something to help. Whatever your position or realm of influence please do whatever you can to bring an end to the aerosol spray program popularly known as Chemtrails. ADDED 7/13/2009 FUND RAISING FOR A CURE At this point just stopping the chemtrails will not be nearly enough. It is becoming increasingly apparent to researchers that virtually the entire population has most likely been infected by chemtrail pathogens that cause Morgellons Disease. The government to date has basically done nothing to fund research to find a cure for the Morgellons problem. Scientist, Clifford Carnicom has proven himself to be a dedicated and formidable researcher into Chemtrails/Morgellons for over a decade. Working on his own without funding he has managed to make many important discoveries about the nature of Morgellons disease and about the effects of chemtrails on the environment and the population. If you wish to donate to fund research for a cure The Carnicom Institute would be an excellent place to start. Copyright Glenn Boyle 2009