Hi my Beloved Sisters and Brothers,

Here is Evidence that the Paa-tal are here

Guys you'll find this particular comment of great interest as I did because he's directly CONFIRMING THE EXISTENCE OF THE PAA-TAL STAR CITADEL 3,000 miles across , which was briefly glimpsed in orbit then ''deemed to be a fake'' by said ''experts'' .

There's an old saying , ''ex, an unknown quantity , and spurt a drip under pressure'' , meaning such ones are just unknown drips under pressure . So when you get ascended masters like this confirming the existence of these giant ships then the petty words of these self-proclaimed authorities end up being proved to be just so much hot air , and therefore worth about as much , hey guys .

{Now, in your time if ships showed up overhead, imagine if you saw a ship that was 3,000 miles in diameter, could you imagine something of this nature? Of course not! You cannot even begin to grasp this type of thing but yet they are there and they will be here. So, understand that as you continue to prepare in your ways of doing so and preparing for changes, you are preparing for all of these types of things to come into your understanding and those of your brothers’ and sisters’ understandings. Does this answer your question?}

Channeled by James McConnell and Dr. Susan Sammarco  www.meetup.com/ancient-awakenings Article may be reproduced in its entirety if authorship and authors website is clearly stated

Published on Mar 29, 2014 Ok, this image was released by the Brasilia Planetarium recently and seems to show a massive disc shaped object stationed above the Earth. The disc is estimated to be around 3-5 thousand miles in diameter. If you look at the bottom left of the image you can see a cloud formation passing over the top of the anomaly, this indicates that the object is not a projection onto the earth. I have no idea what this object is, i can only speculate at this point. I have contacted the Planetarium for further clarification regarding the slide, and will post an update when I get an answer.

The word "Paa-Tal" itself does come from the Draconian language, it's what they named we who are the golden race. What it means is "insanely powerful" which was their way of explaining what it was like to come up against one of us in battle. It was a sick joke on the part of the Dracs to call us this, but we sort of got used to this and adopted the name. So it became a "Nom-De-Plume" almost, ya know, the name we go by when we don't want to be named. Also, the idea that we disappeared from this galaxy entirely is highly exaggerated, but on purpose. We never were from this galaxy or universe in the first place, but rather hail from the super universe of which this is but a small part.

We are the creators of not just the human race but the entire 56 mannish races of the cosmos. This was the fact that started all this ruckus with the Drac's ancestors in the first place because they fancied themselves as masters of genetic engineering when in fact all they were was hacks. We liked our creations to develop their own creativity and intelligence as they evolved into truly sentient spiritual beings whereas the Drac ancestors rather preferred to create minions Like the Annunaki, Zelta & Orion greys , Reptilians ect  and subservient slave cultures. Effectively the difference being that in the end we decided to begin incarnating into our creations while the Dracs never for one minute considered such a possibility in the first place.
Not all of us chose this opportunity to incarnate into, for instance, the Pleidian, Human, and Lyrian races among others. Some chose to stay in the pure high elven form and remained in the super universe on our home world. Others like ourselves, chose the same path as we did. The inhabitants of Sirius A being some of these. i.e. The Sirian silver elf peoples, the Paschaats the cat peoples, and the Aeshir the dog peoples. You see the 56 mannish races we developed or created, though being humanoid or homonoids walked upright like man, but were of various species. Avian as in bird peoples, Lionine or Feline races, as well as the Canine races like the Aeshir. There were also the races of the Mer, the Mem-Ra who were designed for water planets. These ones are the peoples you know as Mer-folk, dolphins, whales of the Ceatacian races who were designed for the water worlds which had very little or no land. The Ainu-Ra, air-breathing elves were designed for fertile terrestrial planets that had plenty of variety in animal and plant forms among which to frolic and play and the Shin-Ra, the fire-breathing elemental elves, who could live on fiery suns and the like. So you see, we were very busy, some even went so far as to call us the founders. Polite though it was, that's not really true. There were a few before us. We simply call them the Ancients. The Ancients were the original Dragons and Dragon-Riders of ancient legend, beings of immense and unbelievable power, even more unfathomable than us.
Because of the choices made by the high elven populace of our home world to stay put there, this decision gave rise to the concept and belief that we had either died out or departed from this universe when in fact we had not. Wherever we had been we left sentinels. It's like a holographic being that was guardian to a massive archival repository wherein was recorded all the information about our activities in this solar system and sector of our galaxy. This repository is on Saturn and it's there that David Ichke and some others came across this guardian sentinel and were fortunate enough to be told some of the history of our people. So that's pretty much the story of the Paa-Tal here.
You can tell anyone and everyone this information guys, it's not really any secret. At least then they might get ahold of the real truth rather than reading all the garbage that's going about doing the rounds.

Hi guys , Here is a pal-tal star gate to there pal-tal station near jupiter you can see them both at the end of vid they can create a star gate any they wish .The 12D tecc they have is amazing

Hi guys here some more info for you ,I have witnessed these the black and golden eagles space crafts they are metallic color to them . 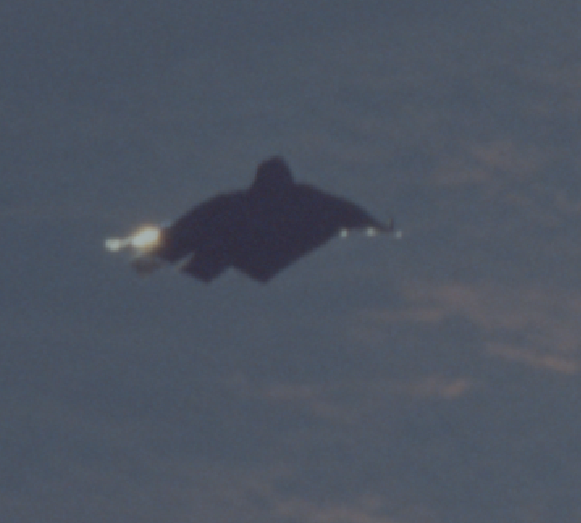 Alert…NASA HAS DELETED ALL THE LINKS TO THESE UFO PHOTOS AS OF JAN 2013.

Take a look at these amazing photos that were leaked out of NASA Johnson Space Center. The quality of the photos is almost HD and the detail we see of the UFO recorded by a NASA satellite orbiting are incredible. The most important question here is not what they are...space stations or ships, but is the species that built them still on board those ships? It looks to me that these photos were taken by someone that works for NASA and had access the famous "airbrush room." That is where they erase all the UFOs or alien evidence out of photos before they are released to the public. These photos are real, I stake my reputation on it. SCW

Hi Sisters and Brothers,  These photos  are of a  Anui - Ra  Black Eagle, they are 35ft wide and look like an Eagle .I have witnessed the black and golden eagles ,The golden eagles are  50ft across.

Hi debby , If they showed that to humanity they would think its independence day

There are no more vid footage , The photo is from that vid

wonder why something that big was only seen by this camera once and not people on the Earth? At 3000-5000 miles it should have more reports and pics than that. Does anyone have a different pic of this ?
. Comment by Debby Many Nations 11 hours ago

Hi Guys , Here is a photo of a Golden Eagle

A 30-year veteran commercial pilot observed a mysterious aerial object above the residential community of Caloundra in Queensland, Australia on Friday, April 18.

According to local newspaper Sunshine Coast Daily, the witness and his friends were admiring the sky at approximately 8:00 p.m. when they noticed two aerial lights. Based on their appearance and behavior, the pilot believed these lights were sky lanterns. But then a third light appeared in the sky. The witness describes this light as having a warm-orange glow. Rather than drifting like a typical sky lantern, this object suddenly changed direction and disappeared.

The witness managed to photograph the mysterious object. After transferring the photos to his computer, he was able to zoom in on the unusual light, and he was shocked by what he saw. As the Sunshine Coast Daily describes, zooming in on the photo reveals what appear to be “wing tips and the slight outline of an aircraft body.”

There were reportedly airplanes and helicopters in the sky that night, but, according to the witness, none of these craft flew in the same flight pattern as the unidentified object. He acknowledges that what he and his friends witnessed could have been a military operation, but he thinks the likelihood of that is small.

He explains to the Sunshine Coast Daily, “I have heard of and seen many, many things in my career and have flown all over the world . . . but nothing like this.” This pilot describes himself as the world’s greatest skeptic. But after witnessing this unidentified craft, he is left questioning what he believes. He explains, “I think it is fascinating and if there is some credibility to it . . . it has changed my mind that there could be something else out there.”

This veteran pilot asked to remain anonymous after reporting his sighting. This is common among pilots who know that speaking about UFOs can make them appear crazy and unfit for duty. Many pilots who witness UFOs never come forward because of this fear of losing their jobs.

Jason McClellan is an editor and staff writer for Open Minds magazine. Jason is also the producer and co-host of the web series Spacing Out!, web content manager and staff writer for OpenMinds.tv, and co-organizer and technical producer of the International UFO Congress. ------Follow Jason on Twitter @acecentric and subscribe to Jason's updates on Facebook atFacebook.com/jason.openminds