Hi, Folks -
Thanks to Reader SB for the pointer to these graphics - which certainly appear to be new Treasury "rainbow" currency items:

You'll notice reference to "silver" and "gold" on some of… Continue

Message to the clan leaders of the Han

Message to the clan leaders of the Han
The Chinese people have been betrayed and will be headed for a future of horrific slavery.

Your leaders are in way over their head when dealing with these people. They think that, by getting US military secrets, they have been handed the world. It is the opposite. China can only rule the world with soft power. Remember, the Chinese are only one out of five people. If they start threatening the other four people, they will only make enemies,… Continue

RELAX.
ALL IS WELL!

All is very well indeed.

Some really "Really Big Demons", including the "Head Demon", have been told it would be wise for them to "Skedaddle..."

This morning I was reading the wonderful eulogies… Continue

People trying to find out what is really happening with the ongoing financial war appear to be confused these days. That is because even at the very top of the world pecking order there is confusion. What my direct sources -as opposed to internet sources like Casper, Heneghan, Poof, Story, Rense, etc.-(my NSA sources tell me they are all reliable but do get fed disinformation from time to time.) tell me is that a new… Continue

BUSH, CLINTON and OBAMA have handed over to RED CHINA the United States most important weapons technology.
This includes SONAR, RADAR, BALLISTIC MISSILE TECHNOLOGY, LASER TECHNOLOGY and STEALTH TECHNOLOGY including the locations and numbers of all such U.S. assets.
This is how the CHINESE SUB managed to "pop up" in the middle of a U.S. Naval Fleet last year.

CHINA is now using this technology against the U.S. and the other Countries as a threat to get their money and our… Continue

“I would like to remind people that in 1918, the Spanish flu showed
a surge in the spring, and then disappeared in the summer months,
only to return in the autumn of 1918 with a vengeance. And we know
that (fall virus) eventually killed at least 40 million to 50 million people.”
- Gregory Hartl, World Health… Continue

your journey here on Earth in this lifetime

You’re in for the most incredible part of your journey here on Earth in this lifetime, the part that you have been rehearsing for in the other realms, that you’ve been preparing for in every different way in your life right now. It is a time for you, the messengers, to come forward – not to preach and to evangelize, not to tell people how you were right or they were wrong, but to be there as a Standard of new consciousness. Because when this void is filled and the awareness comes in, it’s going… Continue

Deliveries were expected today, they have been blocked by OBAMA.

WE did not seek to reveal the following information, it came to us from within their own organization with a request it be revealed.

YING (Little Big Man) has been trained for years to take over the Crime Organization of DR LI worldwide. He is both MING and RED CHINESE. The intell that he was working for Dr WU is untrue.

YING has been responsible for years for removing… Continue


Nary a day passes without further in your face evidence that CONGRESS is continuing in its role as prostitutes for the Banks. Leading Democrat Dick Durbin said this week "they own the place". ALL ROADS LEAD TO CONGRESS. They are silly putty in the hands of CRIMINALS and are continuing to facilitate the TRILLIONS in bailouts being laid off on the public they supposedly represent. As OBAMA said recently, "you have been bought and paid for". They are prostitutes… Continue

The Rebirth Celebration - The midpoint of the Sixth DAY of the Galactic Underworld, May 9-11

The Rebirth Celebration -
The midpoint of the Sixth DAY
of the Galactic Underworld,
May 9-11, 2009

To understand our current situation according to the Mayan calendar I believe it is necessary to first backtrack somewhat and look at what has happened at the most important of the recent shift points of the Galactic Underworld (see Figure 1). A very important such was the beginning of the fifth NIGHT, November 19, 2007. In my book The… Continue

Time Magazine’s coverage of the swine flu scare has a noticeable subplot - preparing Americans for draconian measures to combat a future pandemic as well as forcing them to accept the idea of mandatory vaccinations.

In an article entitled How to Deal with Swine Flu: Heeding the Mistakes of 1976, the piece discusses how dozens died and hundreds were injured from vaccines as a result of the 1976 swine flu fiasco, when the Ford administration attempted to use the infection of soldiers… Continue

NEXT WEEKEND - PLANETARY LOVE BLAST FROM THE HUNAB-KU...?

Lots of folks on Internet are talking about the period of May 9 through May 11 - that's Saturday through Monday, a week from now.

Famous fellow interested in all things Mayan, Carl Johan Calleman, has written about it, describing it as "paradoxically auspicious and ominous:

The Rebirth Celebration by Carl Johan Calleman
May 9-11, 2009
In May 2009 a major emanation from the Hunab-Ku, an unfathomably large intelligence in the center of the… Continue

Blurring the lines between magic and science: Berkeley researchers create an 'invisibility cloak'

Blurring the lines between magic and science: Berkeley researchers create an 'invisibility cloak'

The great science fiction writer Arthur C. Clarke famously noted the similarities between advanced technology and magic. This summer on the big screen, the young wizard Harry Potter will once again don his magic invisibility cloak and disappear. Meanwhile, researchers with Berkeley Lab and the University of California (UC) Berkeley will be studying an invisibility… Continue

“On the surface of the world right now there is war and violence and things seem dark.

But calmly and quietly, at the same time, something else is happening underground

An inner revolution is taking place and certain individuals are

being called to a higher light .

It is a silent revolution.

From the inside out. From the ground up.

This is a Global operation…

A final warning to Bush/Clinton crime gang flunkies in Japan

A final warning to Bush/Clinton crime gang flunkies in Japan

AMERICANS AND WORLD TO BE PUNISHED FOR THE CORRUPTION


1ST MAY IS THE DEADLINE SET BY G-10 AND WORLD COURT, BEYOND WHICH EXTREMELY SEVERE CONSEQUENCES WILL ENSUE IN THE EVENT OF FURTHER PAYMENTS SABOTAGE
It is confirmed that 1st May 2009 (May Day, Feast of the World Revolution) is the absolute deadline set by the Group of Ten and the World Court, via its Writ of Execution, for total compliance by the President of the United States and associates for completion of the Settlements.

NOT a flu epidemic, it is a virus that is suspended in the environment and is HIGHLY DANGEROUS.

‘THE PENALTY FOR NON-COMPLIANCE WILL BE WAR’
The international community of aggrieved Governments represented by the G-10 and the World Court have indicated, via the enforcement team that has been present in the United States since Monday [see report dated 29th April], that the penalties for non-compliance and further defiance by the United States and the high-level criminal group will be extremely severe: and when we queried what that meant, the response was: WAR. 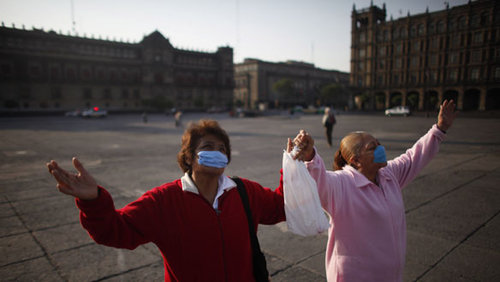 A Russian scientist predicted the deadly swine flu pandemic back in 2004, when he said the deadly bird flu was likely to mix with the human flu virus in the organism of a pig MosNews reports.
Speaking at a conference in October 2004, professor Dmitry Lvov of the Virology Institute at the Russian Academy of Sciences said a flu pandemic would kill up to one billion people within six months, Newsru.com reports.

Many things are happening simultaneously. The update for this morning is limited to the one subject as described below.

The packs are in Treasury.

Dr. LI in CHINA, YINGS BOSS, was/is the "mastermind" behind the insertion of supposedly undetectable extremely sophisticated chips into the Packs/Cards designed to give them access to our accounts when we activated our individual accounts.

This Pentagon activity was prearranged by LI and… Continue