Found this on Fox News today..

"We didn't really know what they were. They were bright, red lights," Whippany resident Paul Hurley, a pilot who works at nearby Morristown Airport, told MyFoxNY TV. "They were just kind of floating along."

What Hurley, his family and dozens of others in Morris County saw were five flickering red lights, one as a pair and the other as a trio, moving across the sky.

"I've been in the aviation industry about 20 years, so I knew they weren't airplanes," added Hurley, who captured video footage of the strange lights.

"It was unsettling for sure," his wife Cindy Hurley told WCBS-TV. "It was something you've never seen before, and a very strange pattern."

The authorities, however, have a pretty good idea of what the UFOs might have been.

"We are reasonably certain, from what we were able to observe," Morristown Police Lt. James Cullen told the Bergen Record, "that they were red flares attached to a balloon." 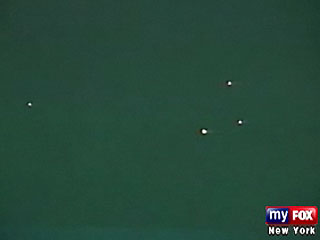