A WIND turbine stood wrecked yesterday with one of its giant 65ft blades torn off — after it was hit by a UFO.
Locals were woken by the 4am smash after strange lights were spotted streaking towards the 290ft-tall generator on a wind farm. 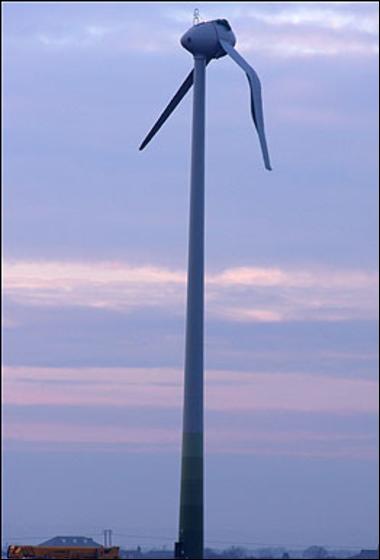 Witness ... Lesley Whittingham, 71
Baffled power chiefs said of the smash in Conisholme, Lincs: “We have a team investigating.” There was no trace of the missing blade. A UFO expert said: “We are very excited.”

A woman motorist told how she saw a UFO zoom towards the wind farm and strike the 290ft turbine.


Clobbered ... turbine yesterday
Dorothy Willows — who lives half a mile from the scene of the hit-and-run — was in her car when “strange lights” loomed in the evening sky.

Hours later there was an almighty smash.

Dorothy said: “My husband Stephen was woken at 4am by the bang.”

Afterwards there was no trace of one of the turbine’s three huge 65ft blades — ripped off in the collision.

Another was left twisted and useless. Other locals told how the lights looked like balls of flames. Lesley Whittingham, 71, even managed to photograph it — and said: “It looked like a giant explosion in the air.”


Impact ... map showing UFO sighting
John Harrison, another witness, described how he looked out of his landing window and saw a “massive ball of light with tentacles going right down to the ground” over the wind farm. He said: “It was huge. With the tentacles it looked just like an octopus.”

The object that struck the turbine at Conisholme near Louth on Sunday dodged others surrounding it — and last night experts had no explanation for what it was. There were NO reports of any aircraft collisions.

Council health and safety officials said even the strongest gale was unlikely to be responsible.

The damage was described by the Health and Safety Executive as a “unique incident”.

Wind farm company Ecotricity admitted: “We don’t know what caused the problem. We are investigating.”


UFO expert Russ Kellett, of Flying Saucer Review, told how dozens of reports of mystery objects poured in before the crash.

He said: “Balls of light were seen in the sky and the MoD has no explanation. We are very, very excited about this.”

Last night the incident was the talk of the internet. It was dubbed the “Octopus UFO” because of the tentacles and how the lights appeared joined in formation.

The MoD said of the latest scare: “Unless there is evidence of a potential threat, there is no attempt to identify the nature of each sighting.”