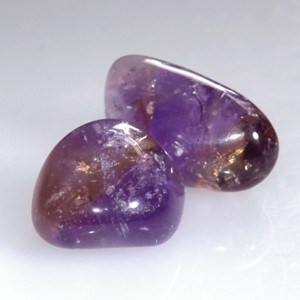 Ametrine is a rare and unusual stone which occurs in quartz when amethyst and citrine reside in the same crystal. Because the color zoning effect is natural, no two ametrines will ever be exactly alike.

Until very recently, the world's only source of this bicolored natural quartz is the Anahi Mine located in the jungles of Bolivia. It is rumoured that the mines where first discovered by native Indians in the
seventeenth century. The Bolivian government declared the land a state reserve and built a fortress near the mine entrance. Despite its remote location, ametrine (as well as natural amethyst and citrine) made its way across the border to Brazil. These goods were then sold as Brazilian
products. This caused a change in the government in Bolivia in 1989. The rights to the mine were sold, and during the past decade, these collectible gems became available on the domestic marketplace.

Miners in the Brazilian state of Bahia are finding small amounts of this combination amethyst/citrine.

Ametrine is among an elite group of gems, because as of now there is just one source of this treasure in the world. You should add an ametrine to your collection now, since its future availability is uncertain at best.

Ametrine is very helpful in getting rid of depression. This leads to inner peace and tranquility.

Many believe that it contains the powers of amethyst and citrine in one stone, making it a very powerful money stone as well as an excellent via to higher psychic awareness and spiritual enlightenment.

Permalink Reply by Sharon Alderman on November 11, 2010 at 10:54pm
Thank you for the sharing of your knowledge....Blessings