A place to put up your automatic writings to compare notes.

This group does not have any discussions yet.

You need to be a member of Automatic Writings to add comments!

Comment by LadyDreamWolf on August 12, 2009 at 11:19pm
when I do automatic writing I find it easier to type it, because my kids are often interrupting, lol, so I can save frequently hehe

Comment by Rebecca Shannon Ling on December 20, 2008 at 2:37am
haha do it on pen and paper torz, it can be clearer for some. everything in its time, dont worry :) just let yourself be.

yeap kerrie, i'd be sure to meditate more, havent been doing that.

Comment by bubbles on December 19, 2008 at 10:52am
oooooo yea yea yea great idea. i love this group! as far as coring/coreing goes you can look at 'all beings' obama video. the last half of it has n excellent coring exercise. hook your energies into mother earth recieveing light from above and allowing it to flow thru you into mother earth and back again to attach/core you to the earth. there are many ways, play w/ these, make some up, and find what does it for you.

Comment by torz on December 17, 2008 at 4:25am
I jsut did this as a first experiment on the laptop but i really didn't like typing, i think i will try writing instead next time...

PAthetic but we all have to start somewhere...

Hewllo vitorias what would you like to know...
Am i on the right path to keep my sould happy
You are not doing all that you can at this time you need to take a step back and relax from everyday hassles in order to learn to communicate with us effectively you need to trust that you can do this
Where am i from

Everywhere and nowhereconcentrate and relax
Yiu have been here a kong time and you are very good at what you do but you are tired it is not long now until you come back to thewhole
What should i be doing now
Learning how to communicate with us if your priority in this time, we need to make a connection with you in order for the plkan to take a=efect there is not much time lefdt befre the change and you will need to be ready in order to carry out your tasks that you agreed to before you came here for the last time
What about soearth who are we..
You are a collection of old souls who know what they are doing and will help take the planet to the next level of consciousness, a new age, a golden age we need your help in order to schieve this in time

In time for what

What si nmy name
The nane you were gviven is not the same you carry always
Jfnmcidnz,ckdi vcjdis love love love love love now now now here here timetimetimehelp meshow me i want ti talk to you i love you

REb, I think i may need your help darling!!!

Comment by CrystalClear2313 on December 16, 2008 at 9:57am
Hi there Reb, thank you for the invite. I still haven't tried Automatic writting yet, But I did bent a spoon yesterday thanks to the video you posted. Very happy about that somehow feeling the energy last night going through ny body and the spoon made feel that I can do anything I want. Even thou I knew I can but that was a confirmation for me. I will definitely try it know!
Thank you for your wonderful energy here...
Namaste

Comment by Rebecca Shannon Ling on December 15, 2008 at 7:22pm
Hi to one and all who joined in :)
Thanks PA and patrick, it was really a magical night that 13th. seeing the HUGE TREE right in my line of sight was really the icing on the cake.

Dodi, there are some steps that you can follow in the forums, but here's how i usually do it:

Holding the pen, you take deep breaths. asked to be protected by the highest light, or you can always imagine three golden rings of light surrounding you.

when you're ready, call out to your higher self (I find calling your higher self in the first few writings easier) and invite yourself to communicate with your higher self through the automatic writing. When you hand feels like its twitching or moving, let it flow onto the paper, no judgements and holding back - except when its going out of the paper. you can then proceed to ask questions, or let it write by itself.

when you've finished, i find it a good practice to thank the entity who gave you the message and to greet it farewell. they usually are polite in my writings. :)

Theres usually no fixed steps in this, just explore what works best for you, but remember to ask for protection! Enjoy~


This automatic writing session will be a favourite of mine for a long time as I helped two others with it.

me and a friend were having shisha and drinks on saturday night when a conversation beside our table caught my attention. A guy was lamenting to his girl_friend (a friend who is a girl) about his neediness for affection from the fairer sex and his incontrollable need for sexual gratification.

so it went on and on for a few hours. so i decided i will *attempt* to help. i asked my friend for a pen and paper, and autowrote. i channeled a group of inner earth beings called the 'wontol' and they were kind to give me some information :)

firstly, they told me that my friend IS a light worker but it wasn't time for her to wake up yet. (see the yellow highlighted parts) they told me on a date in the future of the calendar, she will be awakened, as does all the other lightworkers on the planet.

telling her this information, she got contemplative and told me about her spiritual encounters which affirmed that she has an affinity with being around lightworkers and could be a lightworker!

As for the poor guy stuck in his problems with his bible-wielding friend (not to offend any one of the book, but they were trying to find answers from the book pertaining to his unquenchable desires - to no avail), the wontol advised me, after some seconds of contemplation, to tell him that the being he is praying to knows his every thought. see the red parts for the details.

i debated with my friend whether or not to tell him what i have just written. on one hand i do like to help, but on the other, it may look like i'm being a busybody. so me and my friend concluded we should make the message short and sweet and get the hell outta there.

so when it was time for us to leave...i hesitated. i asked myself...should i tell him...? and paused for a while.

that very moment, a guy from the shop walked past wearing a yellow shirt with a HUGE TREE graphic on it, similar to the sirian tree of golden light. i knew i HAD to tell him.

so i tell him, rather nervously, "hi, i have a message for you"
and he looked up stunned by quiet and receptive. and i relayed to him the message. he was wide eyed, but seemingly accepting the message. as i finished and walked away with my friend. my friend told me that his companion didn' t take it seriously and had a skeptical look on her face. LOL

i felt so blessed that night. :) 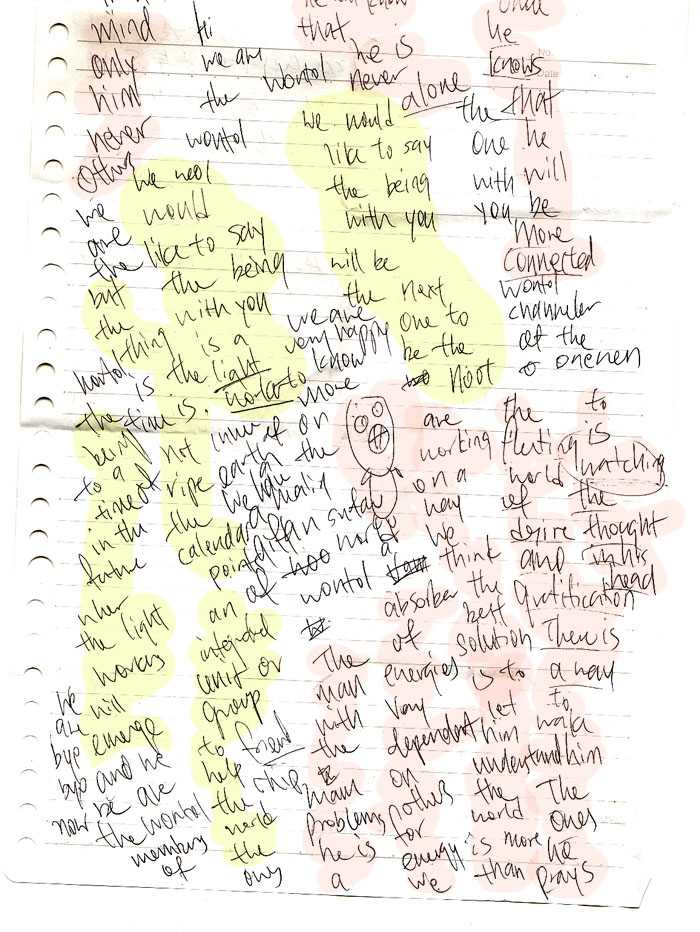