Apparently something big happened last weekend in USA UFO hotspot Fresno in California. I will be following the development of this story. Supposedly there is footage of the crash site. More to come, but for now, here are two articles: 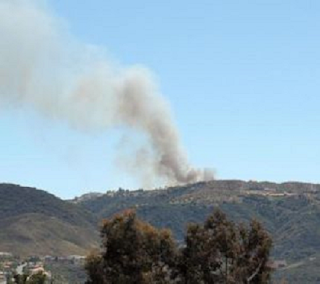 August 27, 2010 - UFO reports have been taking a dramatic turn lately with more witnesses describing events related to a sort of conflict between military forces and large black triangular craft. Such craft were seen in Canada earlier this week allegedly being fired upon by helicopters and another was spotted near Fresno California crashed into the side of a mountain with military vehicles quickly surrounding it. What uncertainty does this bear for the future?
When MUFON's Jeffrey Gonzalez received a phone call on MUFON's 24 hour hotline, what he heard sounded at first like one of the most historically significant UFO sightings since the Roswell incident, but carried with it a far more sinister undertone given other recent sightings of human conflict with these mysterious craft.
With witnesses screaming in the background, "It's trying to take off, it's trying to lift!" Mr. Gonzalez learned that witnesses had seen a black triangular craft crashed into the side of a mountain at the location just north of Fresno. Wasting no time, Gonzalez sprang into action and arrived at the scene where the witnesses had called from. What he observed were three coming from the hillside and several vehicles descending on the object through the rough terrain. From his position on the mountain he then witnessed a light similar to an arc used to cut through metal and in automobile production. Gonzalez speculates that the craft may have been undergoing repairs or being torn through by the welders in order to transport it in more easy to manage pieces. By the light of day the left behind reported seeing a peculiar stingray shaped vessel in front of an abandoned shack on the mountain accompanied by two massive burn marks on the hill.
If there is a conflict ongoing between military forces and these mysterious triangular aircraft several questions need to be addressed. First, what is the nature of the conflict? Is it a serious assault or could they possibly be part of some sort of clandestine training program or war game scenario? Second, if the craft are not part of the US military and the conflict is as genuine as many witnesses are suggesting, what purpose do the triangular craft serve and who are their occupants? Of course this is even assuming they have occupants. And of course the most general and possibly most important question that is ever present remains, what are the craft doing?
The scene described has two possible scenarios that could lead up to it, and either one without additional disputing evidence seems at least possible at this point. Either one, the craft was a test vehicle that underwent some sort of malfunction and was grounded for some reason, or two it was actually engaged in some sort of mission. And if the second scenario is true, what happened to the occupants of the craft? And will there be more looking for them soon? Perhaps the most disturbing bit of evidence suggesting the second scenario might be true comes in the form of the witness testimony overheard by Gonzalez, "It's trying to take off, it's trying to lift!" Unless it was in possibly hostile territory, why would it risk exposure and further malfunctions by trying to take off so quickly after having crashed rather than wait for assistance from the ground?

Permalink Reply by patrick on August 31, 2010 at 7:12pm
If these things can drop from 10,000 feet to 500 feet in a few seconds it's hard to imagine one crashing into a hill (pilot error), or being hit be any missiles. I like the theory that this was a false flag training excercise, I would being a conspiracy theorist, uh.

Permalink Reply by Greg on September 3, 2010 at 4:30pm
reminds me of the delta ships that ed grimsley could see with that powerful night vision.. anyway i'd say its an op, some form of training at least.