U.S Govt. Warning - Strong Solar Storm Reaching Earth Which Can Devastate The Planet At Any Moment.

80% of readers think this story is Fact. Add your two cents.

U.S Govt. Warning - Strong Solar Storm Reaching Earth Which Can Devastate The Planet At Any Moment

Is There A Nibiru Coverup? Second Sun Now Visible Worldwide

We just have received the following E-mail from one of our readers, who had got this from The National Oceanic and Atmospheric Administration (NOAA)

NOAA’s space weather experts are available to discuss this and the potential for more solar storms this week.

Impacts have arrived on Earth, jolting the planet’s magnetic field and triggering strong “geomagnetic storming” in some regions. Saturday’s coronal mass ejection – a burst of charged particles and magnetic field that streamed out from the sun at about five million miles an hour – delivered a glancing blow to the planet. If it had been directed straight at Earth, the geomagnetic storming could have reached “severe” to “extreme” levels.

Geomagnetic storms on Earth can impede the operation of electrical grids and temporarily damage radio and satellite telecommunications. No impacts to the power grid, satellite or other technological systems have yet been reported yet from today’s geomagnetic storm, which could persist for several more hours.

The spot on the sun that produced Saturday’s coronal mass ejection remains active and is well positioned to deliver more storm activity in the next several days. NOAA’s SWPC will continue to watch the active region for activity, and will continue to inform its customers – grid operators, satellite operators, airlines and more – about what to expect, so they can protect infrastructure and the public. 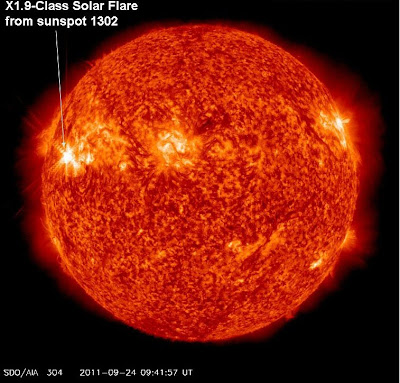 
In the last paragraph NOAA inform that is warning: “grid operators, satellite operators, airlines and more – about what to expect”. We think solar storm could also trigger an 6+ Magnitude Earthquake in coming days as it did before.

In other words NOAA is telling that they expect that a big solar storm can devastate the planet at any moment.If the NOAA forecast happens you will not have anything, nor water to drink because the water pumps to supply it to the city will not work, obviously no emergency service could help you.

Other detail to take into consideration are the nuclear centrals, if the grid systems become complete collapse or blackout, then the cooling systems of atomic reactors will not work and all them will explode progressively as happened at Fukushima,when Japan Earthquake And Tsunami Caused By "Solar Flare".
www.ufo-blogger.com/2011/09/strong-solar-storm-reaching-earth-us.html
10Share
5
0
in Share

Permalink Reply by Besimi on September 27, 2011 at 10:28pm
'' Someone posted today on GODLIKE PRODUCTIONS that they are a cousin of members of the Elite, who are all going into the bunkers. They have knowledge and understanding of things 100 years﻿ ahead of us, and are aware of a huge flare to hit us around 10am on the 28th, that will fry billions of us in seconds. The person said they are a police officer from California, and are disgusted with the beliefs and plans and actions of the Elites in these matters. They don't care if we die, he said. Hard to imagine, wow. '' ~
.........................................saintinwaiting 1 hour ago (You Tube).

OK, I see a couple of problems with this post.

Here is what the NOAA forecast says On Spaceweather.com for September 27th 2011

You can go to http://www.spaceweather.com and go to the september 27th archive to confirm these numbers.

The bottom line the article, because of its title and it's subquoting, they take the information out of context and turning into a disinformation campaign designed to try to bring the readers into fear.

Here's what the NOAA says about what's up ahead:  http://www.swpc.noaa.gov/today.html

....thanks M.E.  .........scary crazy infos indeed, ...but I saw multiple blogs and videos on these Solar Flares lately and was very curious to discuss this.

I wouldn't post this on Facebook or els ,cause of all new comers get scared easily, ..but here at Saviors o E. we get all kinds of these terrible infos often,and are used to it :) .

Please ,disregard this 28-th today's mentioned day,  ...this was just to compare , the info-madness of what's going on lately.

its redicualsley hot and clear skys in the uk at the mo, like hottest all year, and i have a headache n loss of appetite :(

And ive been stuck inside at work rather than where id so much like to be outside in the sun!

Beloveds have we not told you that the energy for change is unstoppable.

Permalink Reply by patrick on September 28, 2011 at 6:20pm
I feel like the energy from these recent flares is transformative, driving us to finally release with love our deepest fears.