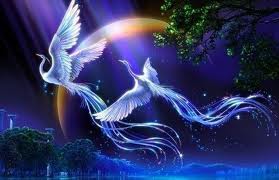 
We will soon all be witnessing the long awaited event of seeing our Mother Ship, once known as the Ashtar Command, appearing in our skies. The appearance of the presence of an unknown space craft that is being sent from the Mother Ship to intimidate an entire city at a time. This craft will only be one small craft sent at a time from the Mother Ship, which is as large as our planet. The disinformation about negative alien presence will be blown away by the presence of these ships. One at a time they will rise above our cities until our entire horizon is covered by the presence of these ships.
Our Illuminati Governments will try to make it seem like they are the bad guys and they will attempt to destroy them. The Ashtar Fleet will swat the weapons of the Illuminati Fleets like a fly swatter trying to knock over an elephant. Our weapons of the Earth are not even in the same dimension as these Fleets. It is the ones trying to take them down - our own airforce who cannot be trusted. The Star Fleets are here to save us from the Annunaki and Illuminati control. There will be 12 days of light when these ships cover our horizons. This is coming soon. About the same time as the zero point pole shift alignment when the Comet is blocking our sun. If you look on the chart of Comet Elenin's travel log, you will see when the sun would be blocked.
As far as what happened on June 15, there was an Asteroid aimed at the Earth that was diverted by our starry brothers. There were more earthquakes surrounding that date than in any ten year period put together. The earthquakes were broken up by our starry family. We have been told that there will be thousands of these asteroids and we will be protected as much as possible. There are certain things that our Great Brother hood can do and some things that they cannot do. What they have not said that they can do is to stop the floods and tsunamis because those are a result of the tectonic plates moving and that is caused by hybernization zones of the Atlantians and Lemurians rising. That will cause a great deal of heat. When we shift dimensions there is a great deal of heat and cold. That is what is happening. The heat from under the oceans will cause tsunamis. Once again they have said, get away from the ocean. It is dangerous. The West and East Coasts are in danger, as well as all states that have nuclear energy sites--that means most eastern states. There will be solar flares in October. There will be a devastating melt down of ice pouring into the ocean. There will be many asteroids and the government have harp waves aimed at the asteroids. Those harp waves will cause three air planes to crash in late September. Those plnes coming in to Southern California, Texas and Florida areas. There will be three bombs in Europe and U.S. which our brotherhood will protect us from. The financial markets will have their final day this fall.
The great ships that cover our horizons will become our gaurdians through these most dangerous of times. Our governments will try to sabatoge their rescue mission. We will be shifted in time. We must do this ourselves. We must continuously place a merkaba around us with the frequencies of 2013. I will put these frequencies on the listening area for you in the near future.
The recommendations for the future are to make sure you are in a place where you will have water that cannot be contaminated by any of the nuclear sites that will begin radiating in the future. Make sure you will not be near industry and get away from the ocean.
Besides that - keep working on Making God's Movie. When you wake up from this little episode, it will be your dream that you have created that will be yours forever.
I'm including this URL http://fractaltime.blogspot.com/ because of the diagram put out by the U.S. Navy and because of information that was put out by NASA and then hidden away. I don't agree with the article in any way shape of form. I just wanted you to know what the U.S. Navy is saying about the future of our shorelines.
Crystalai@2011 cosmicdolphinmagic.com
Namaste,
Crystalai

..especially this  extension added, was amazing.

Permalink Reply by Richard Levasseur on July 17, 2011 at 5:15am
I will welcome first contact with a open heart and positive thoughts.Of a unconditionally loving mindset.