Back in 1947, a group of Native Americans witnessed a UFO crash and went to the site. They arrived before the military arrived. There was an injured extraterrestrial, and the tribe rescued the alien and helped bring him back to health. The alien eventually began to trust the Native Americans and imparted a special story to these folks. The story is the Hidden History of Planet Earth.

The Story is the Terra Papers, and the author is Robert Morning Sky.


Not even had chance to read it myself yet...... but thought it would be usefull and interesting.

THIS IS BRILLIANT !!! Thanks a Ton for bringing this up here!

ONCE YOU READ THE COMPLETE FILE AND A NEW WORLD OPENS UP OF WHAT WE ARE AND HOW WE CAME TO BE!


WITH ASCENSION YOU CAN CLAIM THE CUSTODY OF THE PLANET 'ERIDU' OR 'EARTH' FROM ALL THE EXTRATERRESTRIAL RACES OUT THERE.

ITS NOT DISCOVERING SOMETHING NEW OR BECOMING BETTER! YOU ARE JUST GETTING RID OF THE MIND CONTROL THAT HAS BEEN PERPETRATED ON US FOR THE LAST 4000 YEARS AND TO RETRIEVE OUR ERASED MEMORIES.

OUR DNA HAS ROYAL STRAINS & WE HAVE EVERY RIGHT TO CLAIM THE PLANET TO BE OURS & NOT BE A SUBSERVIENT TOOL FOR OTHERS TO PLAY AROUND WITH OR BE DISPOSED !

Confused at what i'm trying to tell you?

Check the following cropped last page where Bek'Ti is the name of the rescued Alien! 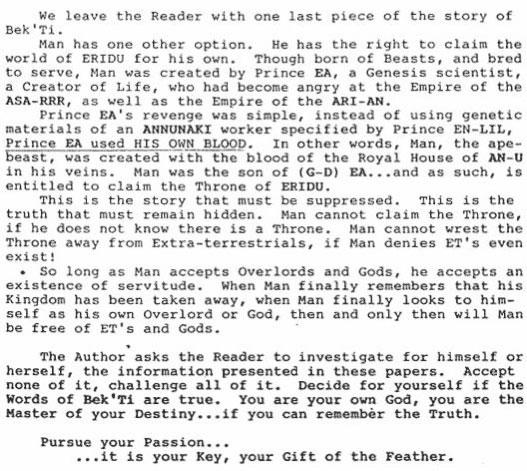 Permalink Reply by Ravi Raju on December 11, 2008 at 1:34pm
If you find the above pasted part of the book intriguing .. download the compete book from the link below:

Its about 53 pages of read with pictures but well worth it!

Permalink Reply by Ravi Raju on December 11, 2008 at 2:38pm
Read on and you'll know that we were created to replace the Anunnaki! we were hybrids.. a genetic experiment and due to the differences amongst themselves we were given their genetic material (from the bloodlines of the rulers) in the secret instead of the Annunaki genetic Materials.

You need to read the complete doc.. the evolution mentioned there was not ours but theirs. We are actually Beast hybrids genetically engineered. Please understand that they had to evolve themselves to be an intelligent species to come over and create us.. they say that there are many many various forms of intelligent species out there and we even have bird / feather DNA in us .. as this was put in by Prince EA due to the passion it showed and coming to think of it we could be more passionate about things than our creators due to this strand of DNA in us.. no wonder we are a prized species.

The Mentioned planet 'Tiamut' .. if you go through the ancient Sumerian Tablets ( 3,500 - 4,000 BC ) was the original Earth which was destroyed through a collision and used to exist in between Mars and Jupiter! the parts of the destroyed Earth are still there in space and this is what is the Asteroid Belt!! Due to the collision the planet Tiamut jumped orbits and presently rests here! the Earth! every wondered why the oceans are so deep and if the water were to be removed we could probably see the scars of this collision! Start reading from Pg.8 and youll know how the destruction happened and how we came about to be.

We were supposed to be a Hybrids of the Powerful Beast and the Anunnaki to replace the rigorous work that the Anunnaki were doing..

The Chapter 'ERIDU' (EARTH) is where rehabilitation of our world starts off on pg 27. Pl read the complete doc Brad and you'll understand what im talking about.. take my word for it!! it really good! and does throw light into some dark corners of our evolution.

I just emailed Ravi my view and I'll share it here.

In my truth, not judgment, just my truth here:

This story is not fully accurate. It simply lost me after stating about evolution through the Darwin theory. Human beings did not naturally evolve. We were created as a universal body type through 22 different races. We were created first, and then have different versions through further genetic engineering: Neanderthals, etc. until we were developed to the final version of the human body type which we are now.

In my view, if you guys want accuracy, watch the Legend of Atlantis, that is by far one of the most accurate videos based on what has occured since our creation which I personally resonate with the most.

I already posted the download link for the complete doc.. but here it is again:

hey guys! fuck this! help me out, id like to download them, or see a place with the whole 56 pages.
Ive tried going to some places but i cant find a good one which will , just , let me download them! gah! could someone help me out? that would be apreciated

hey guys! fuck this! help me out, id like to download them, or see a place with the whole 56 pages.
Ive tried going to some places but i cant find a good one which will , just , let me download them! gah! could someone help me out? that would be apreciated

Permalink Reply by Maitaki on December 22, 2008 at 5:48am
Have you heard about The Urantia Book?? 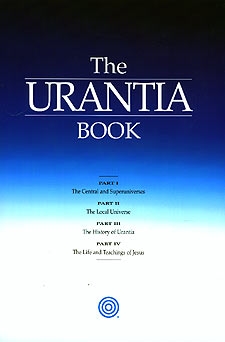 Here is the link to study online.
http://urantiabook.org/newbook/