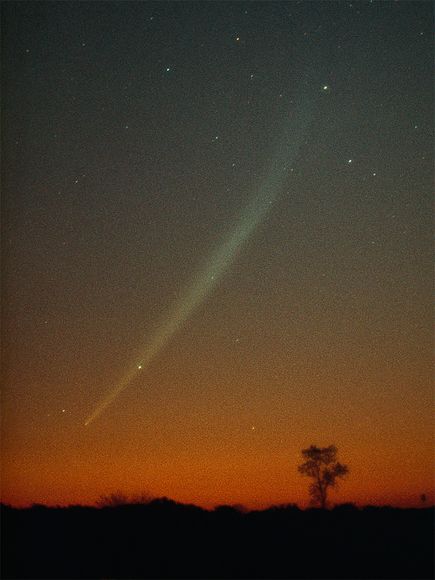 The sun-kissing comet Ikeya-Seki, as it appeared in the dawn sky in 1965.

A recent storm of small comets that pelted the sun could herald the coming a much bigger icy visitor, astronomers say.

Since its launch in 1995, NASA's Solar and Heliospheric Observatory, or SOHO, orbiter has captured pictures of 2,000 comets as they've flown past the sun.

Most of these comets are so-called sungrazers, relatively tiny comets whose orbits bring them so near the sun that they are often vaporized within hours of discovery. (See a picture of a sungrazer spied in October.)

The sun-watching telescope usually picks up one sungrazer every few days. But between December 13 and 22, SOHO saw more than two dozen sungrazers appear and disintegrate.

According to Battams and colleagues, the comet swarm could be forerunner fragments from a much larger parent comet that may be headed along a similar path. And such a large icy body coming so near the sun would result in a spectacular sky show.

Sun-Kissing Comet "Granddaddy" on the Way?

Despite becoming a leading comet hunter, SOHO was initially designed to study the sun. For example, one camera on the probe uses a device called a coronagraph to block out the main body of the sun so that it can see fainter features in the star's upper atmosphere.

Even after accounting for more participation from comet hunters and efforts to optimize images for comet-spotting, the numbers appear to show a significant increase in sungrazers, the astronomers say.

And the recent flurry of kamikaze comets may be pieces from a larger body similar to the Ikeya-Seki comet of 1965, Battams and colleagues say.

The granddaddy of all sungrazing comets, the three-mile-wide (five-kilometer-wide) core of Ikeya-Seki swept within 280,000 miles (450,000 kilometers) of the solar surface.

Rather than vaporizing, the large comet survived its close encounter and whipped around the sun, becoming so bright in Earth's sky that, for a time, it was visible during the day.

Since there were no space-based solar probes at the time, no one knows whether that event was preceded by a storm of smaller comets.

But according to comet hunter David Levy, the coming of a large sungrazer is just speculation for now. Comets in general are quite fragile and break apart easily, so this comet storm may simply be the last gasp of a bigger body that no longer exists, he said.

"Most of the comets that SOHO has discovered have been rather small and are probably little fragments that have spilt off of much larger comets that had previous encounters with the sun," said Levy, co-discoverer of the famous Shoemaker-Levy 9 comet that hit Jupiter in 1994.

"I would be surprised if there really is a larger object waiting to come in and take center stage and these smaller objects are its precursers," Yeomans said. "It's more likely these could be the remnants of a much larger object that broke up and is no longer with us."

The only way to know for sure, Yeomans said, is to watch and see if the rate of increase in sungrazers continues, which he admits would be "pretty amazing and unusual."

He also warns that if there is another Ikeya-Seki barreling toward the sun, sky-watchers shouldn't hold their collective breath. After all, if you trace the orbital paths of the comet storm, any parent body would be coming from the farthest reaches of the solar system.

"We are talking about long waiting periods" until such a comet neared the sun, he said, "possibly anywhere upward of thousands to millions of years."