A Quadrapolar magnetic device is made up of four alternating magnetic bodies, + and —. 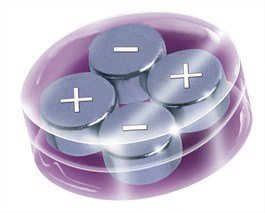 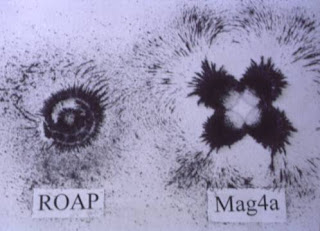 Quadrapolar magnets are much more than a single static magnet; they are magnetic flux generators.

These pictures with iron filings illustrate the flux lines around the Quadrapolar magnetic array.

Notice in the middle of the quadrapolar array there is a magnetic void.

This is where the filed gradient is at its steepest and where the Quadrapolar magnet has its physiologic effect of blocking the firing of the action potentials. The images also demonstrate that all magnetic arrays are not the same.
The energy produced from the Quadrapolar magnetic array's four poles attracting and repelling focuses the energy in such a way to produce steep gradients. The steep field gradients are essential for the effectiveness of the Quadrapolar magnet.
MORE ON QUADRAPOLAR MAGNETS FOR PAIN RELIEF HERE: http://www.neuromagnetics.com/site/science/science.php
Solar poles to become quadrupolar in May
The Yomiuri Shimbun
Magnetic field polarity at the solar poles will reverse and become quadrupolar in May, meaning positive fields will emerge in the North and South poles and negative fields will emerge on the equator, according to the National Astronomical Observatory of Japan and other institutes.
When a similar phenomenon occurred about 300 years ago, the Earth's average temperature fell slightly.
A research team led by Saku Tsuneta, a professor at the observatory, analyzed solar magnetic fields data using Hinode, an observational satellite, and confirmed that the polarity of the magnetic field at the North Pole began to reverse in July last year.
The researchers also found the magnetic field at the South Pole, which was expected to reverse along with the North Pole, maintained a positive polarity, ensuring the formation of a quadrupole magnetic field.
The cause behind the shifts in polar fields is not understood. However, it is known that the shifts coincide with the increase and decrease in the number of sunspots over an about 11-year cycle.
The current sunspot cycle has stretched for close to 13 years. A similar situation occurred in the 17th to 18th century, when the average temperature of the Northern Hemisphere decreased by 0.6 C. The research team believes the quadrupolar pattern also emerged at that time.
(Apr. 21, 2012)
Additional item 4/23/12 Dutchsinse posted this Saturday night on the Solar Quadrapole in May.
http://americankabuki.blogspot.co.uk/2012/04/solar-poles-to-become-...