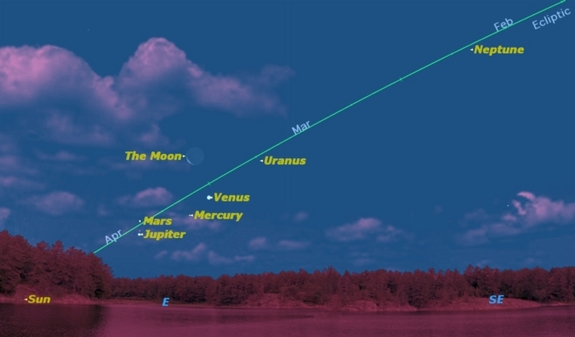 Astrologers have always been fascinated by planetary alignments, and the doomsayers of 2012 have been prophesying a mystical alignment on Dec. 21, 2012.

The modern tools of astronomers, such as planetarium software, show otherwise: absolutely no alignment at any time in 2012. But they also reveal a beautiful alignment visible during the month of May this year. [Planet Skywatching Guide for 2011]

Six planets at one time

While astrologers view planetary alignments as foretellers of disasters, modern amateur astronomers look forward to them as nothing more than grand photo ops.

If you go out any morning for the next four days, you’ll be treated to a view of the crescent moon and all but one of the naked eye planets.

Because the moon moves rapidly from one morning to the next, it will only be part of the lineup for the next four mornings, but the four naked-eye planets will be there for the next few weeks.

Venus is, as always, the brightest and most visible of the planets, and it can be your guide to spotting the others. About half way between Venus and the rising sun is Jupiter, the second brightest planet.