I've compiled the clips, pics and info given from these two sites and made a little video. I thought it was easier that way, instead of clicking on the SOHO video clips individually.

Permalink Reply by Rebecca Shannon Ling on February 15, 2009 at 1:34am
was this the reason why on friday the 13th i walked out for lunch, looked up into the sky and felt 'something'
and then CRIED uncontrollably by the roadside? i had no idea what happened; i thought God or the sun was giving me blessings.

what effects does this have in an astrological sense?

Permalink Reply by EaRtH117 on February 15, 2009 at 2:08am
wow this is amazing! It wont be long before the truth is out!! NAMASTE
Love and Light and thanks for posting this.

Permalink Reply by Rebecca Shannon Ling on February 15, 2009 at 2:17am
i'm going out for a Sun and Jupe tan

Permalink Reply by Bishop on February 15, 2009 at 11:07am
presumably, Jupiter is on the far side of the sun from us right now, so the sun absorbs the blast as it becomes the new sun. Jupiter certantly has the properties of an unborn star, and i guess now is its time!

i so hope this is for true! we should be able to see it soon i hope!

Permalink Reply by Martin on February 15, 2009 at 12:43pm
simply amazing i have shiver down to my spine

I'm so sorry to put your hopes down, guys. I'm really disappointed myself. I went back to August 2007 in the database to retrace Jupiter, and have found what seems like the same outcome as the planet reaches the right side.

Let's not let this get us down, it doesn't mean these changes aren't already taking place -- for one, I'm certain Nasa and the Government are hiding much more than we can imagine. We just need to wait a little longer, we're on the verge of huge discoveries.

We are now in the Age of Aquarius, we're owed some serious revelations. : )

Permalink Reply by Maitaki on February 15, 2009 at 12:56pm
It has been said for such a long time...so maybe this time it really hapen.

Permalink Reply by Ravi Raju on February 16, 2009 at 3:46am
There was some thing happening on Saturn aswell !!! though this was a few months ago and I had posted this on the 2012 Evolution Forums... 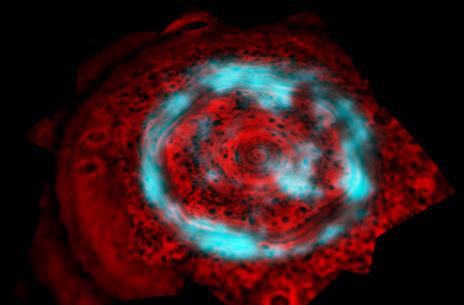 NASA / JPL / Univ. of Ariz.
Saturn's northern aurora glows bluish-green in this color-coded infrared image.
The planet's polar cloud patterns are shown in shades of red. Scientists say
that the areas of auroral activity close to the pole shouldn't be there.


The following article is from:


Scientists say the northern lights on Saturn are unlike anything they've ever seen, on Earth or elsewhere in the solar system. Infrared imagery from the Cassini orbiter, released today to accompany research published in the journal Nature, only adds to the mystery at the top of the ringed planet.

Saturn's north pole is already home to a bizarre six-sided cyclone that planetary scientists haven't yet figured out. That observation marked the first time a hexagon had been seen in atmospheric patterns. The northern auroral displays, monitored by Cassini's visual and infrared mapping spectrometer, also go against the conventional wisdom.

On Earth and Jupiter, for instance, astronomers are used to seeing auroral arcs or rings of light - which glow when energetic particles stream along a planet's magnetic field and interact with the atmosphere. The auroras on Earth, also known as the northern or southern lights, are sparked by the solar wind. Jupiter's main auroral ring is powered by the planet's own magnetic processes.

Saturn's main auroral ring, like Earth's, is caused by the solar wind. But the newly observed infrared displays go all over the place.

"We've never seen an aurora like this elsewhere," the University of Leicester's Tom Stallard, lead author of the Nature paper, said today in a NASA news release. "It's not just a ring of aurorae like those we've seen at Jupiter or Earth. This one covers an enormous area across the pole. Our current ideas on what forms Saturn's aurorae predict that this region should be empty, so finding such a bright one here is a fantastic surprise."

The Hubble Space Telescope has observed Saturn's ultraviolet aurora before, but the widespread infrared aurora wasn't seen because the region where it appears was hidden from Hubble's sight. Cassini, which has been circling Saturn and its satellites for more than four years, has had a much better view of the polar region.

The northern infrared aurora has been seen to change size and intensity dramatically as the solar wind varies. Occasionally, it fades completely away, over a period of as little as 45 minutes.

"Saturn's unique auroral features are telling us there is something special and unforeseen about this planet's magnetosphere and the way it interacts with the solar wind and the planet's atmosphere," said Nick Achilleos of the University College London, a member of the $3.5 billion Cassini mission's magnetometer team. "Trying to explain its origin will no doubt lead us to physics which uniquely operates in the environment of Saturn."

For earlier intimations of Saturn's weird light shows, check out this report from New Scientist, based on research Nature published in June. For the latest about all of Saturn's mysteries, click on over to the Cassini mission's Web site at NASA's Jet Propulsion Laboratory. You might also enjoy learning more about Saturn's spooky southern hurricane. While you're at it, don't miss our "Best of Cassini" slide show. And did I mention that Mars, Uranus and Neptune have auroral displays as well?

Permalink Reply by newage8001 on February 17, 2009 at 11:26am
i hope this is true but i dont trust these readings they have done nothing to gain your trust. and how do you know your not talking to a reptile. you dont. pleadien teachings have said the forces of darkness would appear as them. and im not talking about this reading alone im talking about all of them. and im not trying to be negative. i dont want to us being decived. i want the truth to come as much as all of you but we need to be patent. if a pleadien needed to talk they would come to me. if we rush this it could turn bad. and veacom suid and now ouns youtube and veacom is mason ouned. and they are satenists. and i dont take the mason lightly. ive been striped of my home and harrased by police and more that i choose not to say cause of a mason. there is a nostrodomis quatrian that speaks of two suns. every thing nasa shows us has been air brush and edited. if we do get to sun it will probly be niberu geting that close. i just dont want to belive something you have no clue were it came from. love and light