How To Kill Billions Of People 'Trigger An Ice Age'

The secret to killing billions and billions of people without being too obvious about it, is to make it difficult or impossible to grow enough food to feed them. Geological history demonstrates that the best way of doing this -- short of a global thermonuclear war -- is by triggering a global ice age. If winters are too long and summers are too short and cold, crops cannot be grown, and livestock will starve. Without enough food, billions of people will die, until there are only enough people to match the dwindling food supplies. 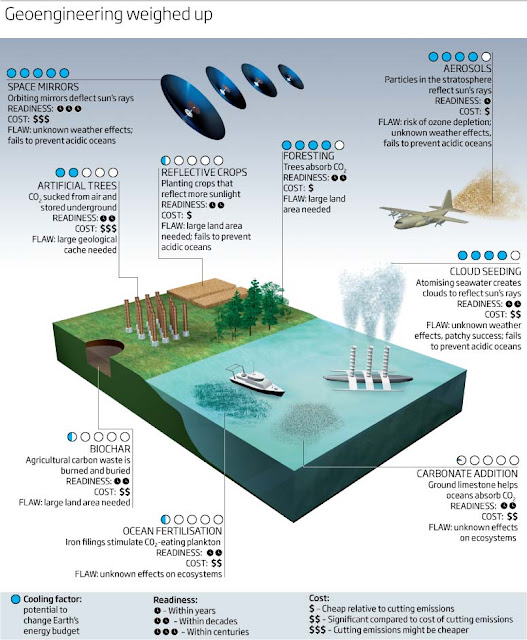 Who would want to do such a thing? Well, no one will actually come out and admit to planning a great global human dieoff. But there are some people who are playing with the idea of significantly cutting back on Earth's solar allotment, in the name of mitigating "climate change." But since Earth's climate is always changing no matter what humans do, why would a warmer planet -- with longer growing seasons and more food -- be worse than a cooling planet, with less food and shorter growing seasons?

One of the backers of the new "geoengineers" is Bill Gates, of Microsoft fame. Mr. Gates feels strongly about "climate change," strongly enough to help finance a planetary geoengineering scheme to reduce solar input to the planet.

As well as Gates, other wealthy individuals including Sir Richard Branson, tar sands magnate Murray Edwards and the co-founder of Skype, Niklas Zennström, have funded a series of official reports into future use of the technology. Branson, who has frequently called for geoengineering to combat climate change, helped fund the Royal Society's inquiry into solar radiation management last year through his Carbon War Room charity. It is not known how much he contributed.

Professors David Keith, of Harvard University, and Ken Caldeira of Stanford, are the world's two leading advocates of major research into geoengineering the upper atmosphere to provide earth with a reflective shield. They have so far received over $4.6m from Gates to run the Fund for Innovative Climate and Energy Research (Ficer). Nearly half Ficer's money, which comes directly from Gates's personal funds, has so far been used for their own research, but the rest is disbursed by them to fund the work of other advocates of large-scale interventions.

According to statements of financial interests, Keith receives an undisclosed sum from Bill Gates each year, and is the president and majority owner of the geoengineering company Carbon Engineering, in which both Gates and Edwards have major stakes – believed to be together worth over $10m. _Guardian

Big money backers of geoengineering schemes hide behind the IPCC and the "scientific consensus" which supposedly backs the theories and computer models of "climate change." But after ClimageGate, and some other huge public embarassments hitting the orthodoxy of climate hysteria, it rather looks as if these wealthy climate barons are either not keeping up with the evidence, or they have other hidden motives behind their actions.