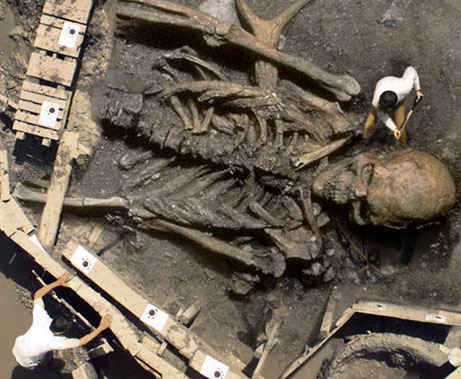 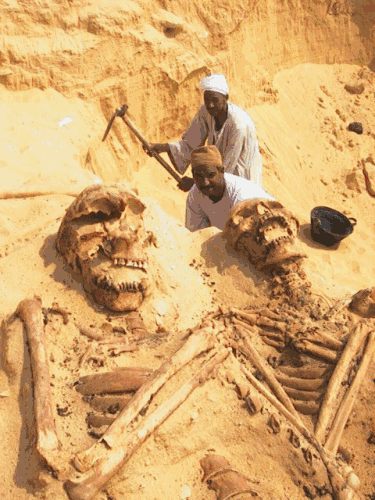 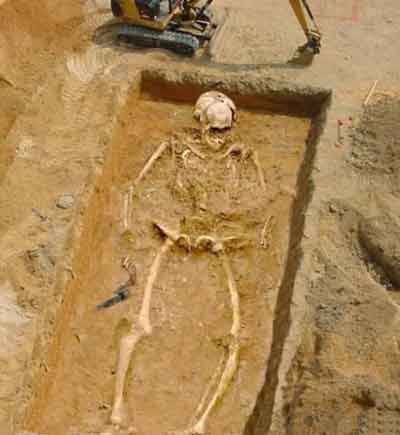 Permalink Reply by Besimi on July 2, 2009 at 6:47pm
They reveal a lot, that's why those bones are being hidden.

Permalink Reply by Besimi on July 2, 2009 at 6:56pm
http://urbanlegends.about.com/library/bl_giant_skeleton.htm


FYI. Just got this Email, only God knows better about this story, but check it out:

Recent gas exploration activity in the south east region of the Arabian desert uncovered a skeletal remains of a human of phenomenal size. This region of the Arabian desert is called the Empty Quarter, or in Arabic, 'Rab-Ul-Khalee'. The discovery was made by the Aramco Exploration team. As God states in the Quran that He had created people of phenomenal size the like of which He has not created since. These were the people of Aad where Prophet Hud was sent. They were very tall, big, and very powerful, such that they could put their arms around a tree trunk and uproot it. Later these people, who were given all the power, turned against God and the Prophet and transgressed beyond all boundaries set by God. As a result they were destroyed.

Ulema's of Saudi Arabia believe these to be the remains of the people of Aad. Saudi Military has secured the whole area and no one is allowed to enter except the ARAMCO personnel. It has been kept in secrecy, but a military helicopter took some pictures from the air and one of the pictures leaked out into the internet in Saudi Arabia. See the attachment and note the size of the two men standing in the picture in comparison to the size of the skeleton !!

Permalink Reply by Besimi on July 2, 2009 at 6:59pm
They claim that a skeleton of a gigantic human was discovered during a gas exploration in the south east region of the Arabian desert and sports an attached photograph to "prove" the claim. However, the cleverly created image of the giant skeleton is actually an entry in an image manipulation contest by artist "IronKite" in which participants were instructed to create "a picture of an archaeological discovery that looks so real, had it not appeared at Worth1000, people might have done a double take".The message tries to add legitimacy to its fanciful tale by referencing the Quran's Prophet Hud and the people of Aad (or "Ad"). Some Islamic references do claim that the people of Aad were thought to be giants. However, other material describes them as having a "stature tall among the nations" or as simply being "physically well-built".

even if it is true, it only proves AlQuran is right...

I had posted a vid on this in August 2008.. take a look and go through what it actually is in the description below :)

This was supposedly done for a photoshop contest on Worth1000 (which hosts regular contests), back in 2002. The contest was supposedly called, "Archaeological Anomalies 2." and the first picture shown won 3rd place, photoshopped by a person who goes by the screen name of "IronKite"

All the other pictures showed in the video were also supposedly part of the contest.

you can find the details on the national geographic site:

Permalink Reply by Rebecca Shannon Ling on July 3, 2009 at 3:59am
you have to be careful, some photos are from photoshop websites... i believe the 2nd photo is photoshopped. its from worth1000.com a photoshop website

Permalink Reply by Besimi on July 3, 2009 at 1:35pm
If only one pic,from thousands of pics is real,than it makes its point.
...Giants have existed in the past for sure,and that's the fact.
...You know ,real knowledge and wisdom were hidden.

''IF PEOPLE TRY TO PROVE SOMETHING AS REAL,AS THEY TRY TO PROVE IT AS HOAX,WE 'D BE IN A BETTER TIMES.'' .......That's what I have noticed in my life.

Permalink Reply by Besimi on July 3, 2009 at 1:51pm
These Bones have Big Effect on breaking our bondages and believe systems, just like finding the thread on the bundle.
..........big bones are very destructive to the Evolution Theory as we have learned on schools.
..........they break the Elite assambled dots to brainwash us ,on our origines. Elite wall is crumbling.

Permalink Reply by The Great Cornholio on July 4, 2009 at 3:11am
..........King Kong fossils are very destructive to the Alien Creation Theory as we have learned on schools.

These Bones have Big Effect on breaking our bondages and believe systems, just like finding the thread on the bundle.
..........big bones are very destructive to the Evolution Theory as we have learned on schools.
..........they break the Elite assambled dots to brainwash us ,on our origines. Elite wall is crumbling.